“A twisty and slightly more technical trail in this system. ” This loop of singletrack has a bit different character than the other two trails in this system. It is a one way trail in the direction described. It generally twists through the woods around the Reagan Park sports fields. It can be a bit silly at times when twisting for no real reason through woods. It is worth the ride though.

If you are following the Medina Huffman and Reagan Park Trails featured ride you'll begin on a paved path after crossing the road at an unmarked point from the River Trail. There is a sign pointing you onto the singletrack to the left. You quickly ride over a built up wooden whoop-de-doo and twist through the woods on the edges of the Reagan Park fields. This is one of the bit silly sections I mentioned earlier since the trail is not following any terrain features.

After this is drops down towards the fields and a stream. This is one of the confusing sections if you are not following the map, but it is much better with recent updates. Children playing in the area have beaten down paths all over the place. Do not cross the stream here and stay to the left. You'll end right back in the section of woods you just left, 10 feet from the previously ridden trail. A couple of twists later you'll take a bridge over the stream. Stay to the left here and then again into woods for a short section before coming out near right field of a baseball field.

Follow this fence towards home plate and look for a marked entrance back into the woods along the fence. From here the trail is well marked and fun until you pop out on a road across from the skate park and RC car track (Do you wish you had a different hobby than mountain biking all of a sudden?). The path is beaten into the grass to the left of both of these features and then drops into the woods on the left again. You'll shortly cross a bridge that comes up on your left and after this the trail goes left to take a loop with some small jumps and a made up rock garden. Follow the trail easily from here until you end up back where you started. Go around the loop again or cross the road and jump on the River Trail.

There is alternative parking in this park if you are so inclined, but the normal mountain bike parking is at the Huffman Park Fields. The sign for this park even has mountain biking written on it. This was quite nice to have in the Cleveland-Akron area that, until recently, was quite hostile to mountain bike development except in a precious few locations. 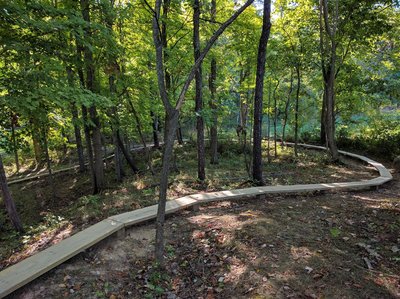 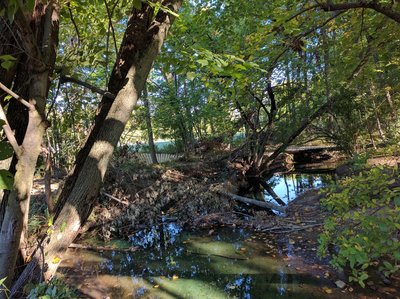