“A fast and flowy trail close to Cleveland, built in a modern sustainable style. ”

Open 30 minutes before sunrise to 30 minutes after sunset. Closed when wet and seasonally after the last thaw until the trail surface dries and hardens. The clay rich soil sticks to your tires so well it's impossible to ride through anyway. Trails are also one way. There are many rumors of rangers handing out tickets for violations to both of these rules. Check @CMPmtb on Twitter for the latest updates.

Ride this slow with your significant other and enjoy the scenery or bump up the speed and hang on for a fun ride.

There are two main trails at the Royalview section of the Cleveland Metroparks Mill Stream Run Reservation, the Yellow Trail and the Red Trail. They are both relatively flat and fast singletrack.

The Red Trail also has a lollipop spur that contains some small built stunts. All of the trails are one way except for the stem of the lolli, obviously. There is about 150 ft. of elevation change over the park.

Generally the trails climb on the uphill part and share the same generally descending section.

The trail is generally well marked and consists of 95+% fast, flowy and generally flat singletrack through an eastern hardwood forest. There are many small stream crossings, most with bridges. There are also a couple of sections of boardwalk trail.

The recommended ride is to start at the lower parking lot. Begin the ride with the easy to find and longer Yellow Trail until it intersects with the Red Trail. The Red Trail at this point heads in a generally downhill direction and the trail gets a bit faster! When the trail intersects with the road, cross it and continue on the Red Trail past some beautiful small ravines. Just before this trail meets the Yellow Trail, the Red Trail Spur is off to the right. Take this to add some length to the ride and perhaps do some small stunts. Continue on the Red Trail until you reach the road again. Take a right here to shortly return to the lower parking area. Repeat or retire as necessary.

The recommended ride can easily be joined from the upper parking lot, but I prefer finishing the ride with the downhill section.

All trails here are in the same general type of forest with glimpses of some river beds typical of the area up to approximately 50 feet deep. Keep your eyes peeled for wildlife and plants of all sorts when you're on this trail. One of the great features of this area is its biodiversity.

Go enjoy! It doesn't get much better than this in the Cleveland area (for now, hopefully!).

The park entrance is attached to the All-Purpose trail which links to the rest of the "Emerald Necklace", so there is lots of parking just a ~1/2 mile in either direction from the park entrance.

These trails are the first of hopefully many to be built with the cooperation of the Cleveland Metroparks, CAMBA, and IMBA. They were opened for the first time in June 2012. There is a large standing brick chimney a couple of miles into the ride that is rumored to be from a sugaring shack. There are trees growing there that seem to suggest the structure has been gone for at least 50 years. Does anyone have more details of this?

Some more history from Cleveland Metroparks' Visitor Services:
The big chimney was attached to an old maple sugar house that made 300 gal./yr 'til about 1940. The old sap buckets are still there, in rusty bits and pieces. Another camp, which burned in 1945, located about .5 mi. East, produced 1200 gal. Sanderson's Corners was located at the South end of the park using the Rocky River E. branch for saw and mill power. ~1500 maple trees were harvested and sold to a Cleveland basket factory. Read The History of Mill Stream Run written by Deloss F. Drake. 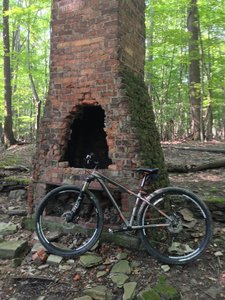 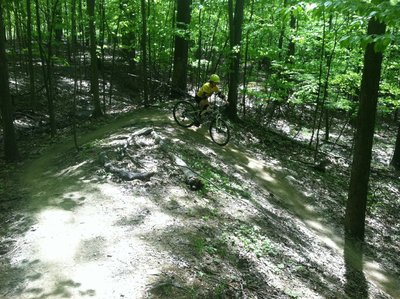 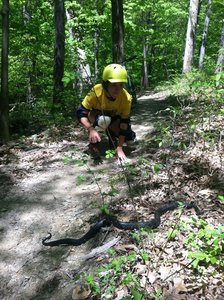 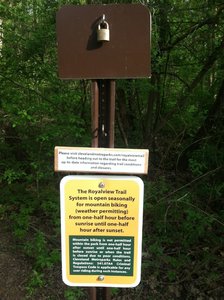 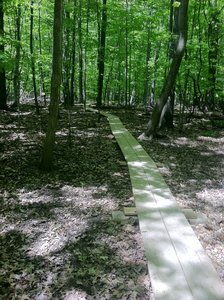