“Endless miles of gravel in the pine stands of the Piedmont National Wildlife Refuge. ”

This is a big loop among the seemingly endless gravel and dirt roads in the Piedmont National Wildlife Refuge and bordering Oconee National Forest. There are a couple of creek crossings that will definitely get your feet wet, but the only challenge is the overall distance. The route starts and ends at a parking area just outside Juliette, GA, site of the movie Fried Green Tomatoes.

The local SORBA-OMBA group sometimes runs the Fried Green 50 race/fundraiser/group ride through the PNWR. The route varies from year-to-year, but this will give you an appreciation for the local gravel.

Download the GPX for the route, use the MTB Project mobile app, and/or find a local, and bring your cross country bike for this peaceful route through the Piedmont National Wildlife Refuge. The forest is mostly loblolly pines and you'll see a lot of them (and not much else) along the route. The forest is managed as a key habitat for the endangered Red Cockaded Woodpecker, but bird nerds have logged over 200 different species of birds.

There are a lot of intersections along the route, but they are all well marked with road names. You'll pass through some of the intersections multiple times so I'm not going to give full turn-by-turn directions, but obviously you can get creative and make longer/shorter routes to your liking.

The route starts at a parking area on the Ocmulgee River just outside Juliette, GA, site of the Whistlestop Cafe in the movie Fried Green Tomatoes.

Cross the bridge over the Ocmulgee River and then turn right into the sprawling suburb of East Juliette. Follow the route through East Juliette and then go straight onto Barron Russell Road to enter the PNWR. This will give you the first take of the kind of gravel roads immersed among the loblolly pines that you can expect for the next couple of hours. You'll also get the first of many creek crossings in.

You ride about 15 miles on various roads inside the PWNR before you come to the paved Round Oak Juliette Road. A right at this point will take you quickly back to the start. The route goes straight onto Little Rock Wildlife Drive, which is one of the prettiest segments in the route. You head down into an opening with a couple of ponds where wildlife can often be found. Then you head into a hardwood forest along a creek before weaving across the forest to another creek. At the end of Little Rock Wildlife Drive, turn right and follow the low-traffic paved Round Oak Juliette Road for about 1.5 miles.

This takes you on another five miles of gravel through PWNR to the highway GA 11. Turn left (north) along the highway for about 2.5 miles to the next gravel segment on Westvaco Road. Wind your way 17 miles on gravel and dirt through the heart of PWNR (some of the intersections will look familiar) back to the paved Round Oak Juliette Road. Another two miles of pavement takes you to the final dirt segment on Old River Road. Old River Road takes you back to east Juliette.

Overall, there are about 47 miles of gravel/dirt and six miles of paved roads. Any singletracks in PNWR are clearly marked for foot travel only.

The PNWR is a monument to erosion. Poor land practices starting with antebellum-era cotton farms (which cleared the forest) and the boll weevil (which cleared the cotton) caused massive erosion leading to abandonment of the land. The federal government stepped in to rehabilitate the forest during the depression and today the forest is reestablished, serving as a haven for wildlife and the endangered cross country mountain biker. 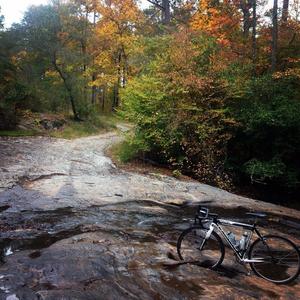 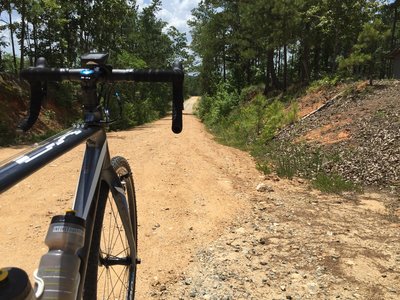 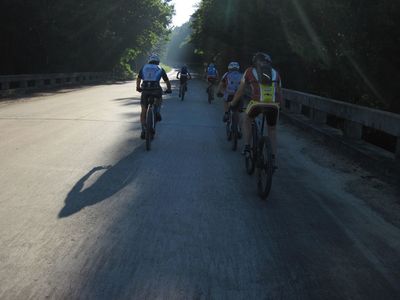