“This route links up many of the advanced, more rustic singletracks at Rock Hawk. Lots of rocks and swooping turns. ”

The advanced singletracks at Rock Hawk are the old-school hand cut type. They are narrow and rock-strewn with lots of short and to-the-point ascents and descents and a lot of swooping twists and turns. Sadly, the trails don't seem to get that much traffic as they were covered in leaves several months after fall to the point of being hard to follow. That adds to the sense of adventure though. The easier color trails tend to be current or former forest roads, and these seem better trafficked.

The trail features historical placards, lake views, and one decrepit Model T as well as the opportunity to see migrating waterfowl. The easier color trails are lined with signs describing the local flora and fauna. A large campground sits right down on the lake if you want to make a weekend of it.

The ride starts at the main parking area near the Hawk Effigy. Take a few moments to climb the tower overlooking the Effigy and peruse the historical placards before embarking.

Just after the Hawk, the Effigy singletrack breaks off to the left. This swoops in an out of a small ravine down to the intersection with the Orange Trail. Shortly after that, the top of the Upper T begins to the left. Upper T is the first taste of the kind of singletrack you can expect along the rest of the loop: narrow, occasionally rocky, and with lots of mostly swooping turns. Upper T flows into Model T, the transition being discernible only because you reach a Bailout point. In this direction these two trails flow generally downhill, but there are a couple of short, steep climbs in each.

At the end of Model T, follow the Green Trail doubletrack east where it merges with the Blue Trail at the entrance road. The Blue Trail is a gravel affair for a short distance until you get to the parking area for the archery range. You'll actually ride through the center of the archery range. They shoot away from the trail towards the 3D targets off the trail, but stay off the enticing singletracks that lead down to the targets.

Past the archery range, the trail narrows to a doubletrack. At the far end of the Blue Trail, there is another parking area and then a viewing platform for a wetland area where migratory birds congregate at the appointed time. At this point, the Blue Trail turns back west and becomes a singletrack passing above a swampy area as you begin a gentle climb.

At the 7.2 mile mark, you'll find yourself at the top of the Hawk's Head trail. This is the steepest of the advanced trails, screaming its way down almost to the lakeshore down a narrow, swooping singletrack. There is a bit of a tough climb out of this though. Hawk's Head ends at the guard shack for the campground.

Turn left at the guard shack onto the main road road until you get to an obvious trail crossing. You'll turn left onto the very end of the Yellow Trail and then quickly right onto The Talon. The Talon is the last of the advanced segments with character similar to Upper T and Model T. At the end of The Talon, turn right to take the shortcut across the main road to the Green Trail. This doubletrack takes you back to Effigy which takes you back to the parking lot.

The advanced singletracks are blazed with both painted blazes and some plastic ribbon, so if you haven't seen one in a while, circle back. The other "color" trails are superbly marked with each intersection numbered.

The park's motto is "25 miles of trails and 12,000 years of history." The name of the park derives from an effigy in the shape of a hawk arranged from rocks on the ground—well it does if you use your imagination a little. Supposedly, the effigy is around 2,000 years old, but nobody knows who or why it was built. Just off the main parking lot, a number of interpretive signs line the walkway to the effigy itself. These cover both the history of the area as well as different animals that you might expect to see in the park.

in Rock Hawk Effigy and Trails

in Rock Hawk Effigy and T… 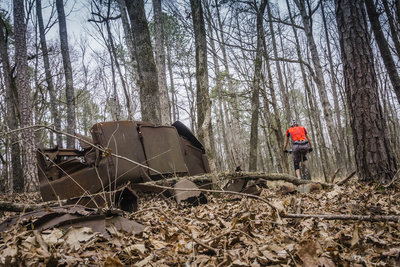