This is the second of three segments of the regional MTB route signed as route 65 (Gotthardpass) with the ubiquitous red and yellow way-marking signs used throughout Switzerland. Gotthardpass Section I actually traverses the pass from Andermatt to Airolo. From Airolo in the val Tocino (Tocino River Valley), Section II climbs again well up into the mountains. There is a lift option to bypass a little more than half the climbing, but fret not as a healthy 600 m (2000 ft) remain to be climbed.

Section II is the most picturesque of the three sections and it also offers the most interesting riding with a higher proportion of singletrack. Gotthardpass Section III begins in Olivone and descends down towards val Tocino about 20 miles (35 km) downstream of Airolo. You can use Switzerland's excellent train system as a shuttle.

Both Andermatt and Airolo make nice bases to complete all three sections of this route; Andermatt is perhaps more picturesque. Section II starts at the train station in Airolo.

There are some accommodations near the mouth of Lai da Stontga Maria (Lake) around 16 miles or in Olivone at the end of Section II. Alternatively, you can take the yellow Postbus (most offer bike carriers) from either to wherever you may be staying if you don't want to do Section II as an out-and-back.

Sections II and III can be done in a single day, especially if you take the Funicolare Piotta-Ritom (Cogwheel Railway) to save 785 m (2575 ft) of climbing at the start of Section II (CHF 24 in 2016). Section III then is downhill all the way to Biasca where there is a train station.

You'll need to purchase a separate fare (half fare ticket or velo ticket) for the bike if you're using the train as a shuttle.

There is a price to pay for accessing the beautiful terrain, lakes, and the singletracks high above the val Tocino (Valley) floor. It's either 750 m (2500 ft) climbing on the Airolo - Lago Ritom or the Gotthardpass Section II - Lift Option and CHF 24 with less climbing. However, once you reach Lago Ritom most of the days' climbing is below you. This also signals the start of the best trail segments as well as the most beautiful terrain as you'll find yourself nestled amount 2500 m (8000 ft) peaks in a high alpine valley.

At Lago Ritom, Val Piora begins deceptively as an easy doubletrack around the northern shore. At the far end of Lago Ritom, the doubletrack begins a gentle climb to Lago Cadagno. Shortly after passing this second lake, there are two Rifugi (mountain huts) that offer food and drink. After these two huts, the climb becomes more difficult and the doubletrack becomes fainter eventually turning to singletrack. About 2.5 miles from Lago Ritom, there is a particularly unpleasant half-mile climb at 10% grade. But this takes you to the high point for the entire Gotthardpass route.

From this point, it's another half mile on mostly rocky singletrack to reach the Passo dell'Uomo (Pass of Man) and the trail of the same name. The first mile after the pass follows a tumbling creek with several short waterfalls. At this point, you'll have a beautiful view of the entire Lai da Sontga Maria (Lake) below. The next mile is a very steep (250 m; 820 ft) descent on loose rocks with some ruts. With careful line choice and speed control, you'll successfully navigate to the shore of Lai da Sontga Maria. The next mile is an easy flat section along the shore to the Passo del Lucomagno.

From the Passo del Locomagno, you descend the main pass road (highway 416) for about one mile. Just to the north of a tunnel along the main pass road, a doubletrack (Brenno del Lucomagno) exits to the right and quickly crosses the debris field for a rock slide as it bypasses the tunnel. As this nears the main road again after about 0.4 miles, turn right onto a doubletrack that crosses a bridge over the Brenno del Lucomagno Creek. After another 0.4 miles, the trail continues towards the south where it enters a forest for a short distance. The doubletrack continues through pastureland on the other side of the forest. After climbing about 300 ft (100 m), the route becomes a singletrack at the far end of the valley.

The singletrack descends steeply through the forest for about one mile. It's a little difficult, but most people will probably be able to ride most of the way. As the forest gives way to pasture again, the singletrack becomes a doubletrack again and this takes you out to the main pass road where you can connect with the Storico Strada del Passo Lucomagno (Historical Lucomagno Pass Road). It follows the historical alignment of the pass road. Calling it paved is generous as it apparently hasn't been maintained in quite some time. You may also find that the path is littered with fallen rocks, small landslides, and organic debris. But the route is quite passable, and all this makes it more fun on the mountain bike anyway.

Parts of the road are carved as a sheer cliff into the side of the mountain high above the Brenno del Lucomagno Creek but far below the surrounding peaks. At the end of this segment, you'll have to make a very sharp (nearly 180°) turn back onto the main highway for a short distance to the beginning of the Camperio segment.

The Camperio segment is predominantly forest road although there are some short singletrack sections and a half mile on the paved historical alignment of the pass road that is still open to local traffic. This takes you to the outskirts of Olivone where you can connect with the Gotthardpass Section III. 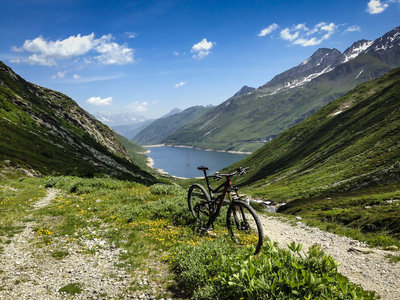 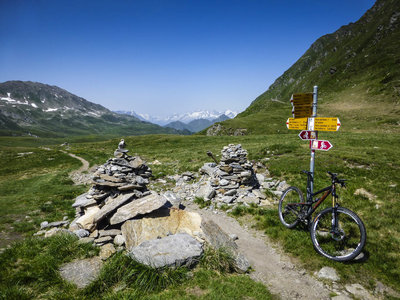 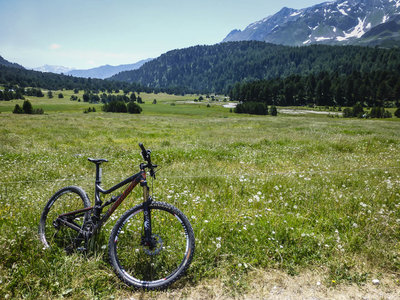