From Andermatt, this route climbs through the 2105 m (6909 ft) Gotthardpass before crashing down into Airolo. It's the first of three segments of the regional MTB route signed as route 65 (Gotthardpass) with the ubiquitous red and yellow way-marking signs used throughout Switzerland.

The pass marks a continental divide with waters north of the pass flowing to the North Sea via the Rhine River and waters south of the pass flowing to the Adriatic Sea via the Po River. It also separates the German (north) and Italian (south) regions of Switzerland. It has been an important trade route for almost 1000 years, and crossing it on a mountain bike imparts a deserved sense of accomplishment.

If you do this ride on a busy weekend, you may encounter a veritable carnival in the pass and regardless there are a number of lakes and military fortifications in/near the pass to explore. And because this is a high alpine ride, the scenery is great too.

Both Andermatt and Airolo make nice bases to complete all three sections of this route; Andermatt is perhaps more picturesque. From Airolo, you can take the train through a tunnel under the pass to Göschenen. In Göschenen, there is another train that takes you through the Schöllenenschlucht (Gorge) up to Andermatt for the start of Section I.

Sections II and III can be done in a single day, especially if you are take the Funicolare Piotta-Ritom (Cogwheel Railway) to save 785 m (2575 ft) of climbing at the start of Section II. Section III then is downhill all the way to Biasca. In Biasca, you can take a train back to Airolo.

You'll need to purchase a separate fare (half fare ticket or velo ticket) for the bike if you're using the train as a shuttle.

You can save climbing from Section I with the Yellow Postbus (most have bike carriers) to the pass, but of course then you'll miss Anbetung der Kühe (Adoration of the Cows) and the accomplishment of having pedaled over the pass

The route starts from the train station in Andermatt. Do be sure to visit the Schöllenenschlucht (Gorge) and Teufelsbrücke (Devil's Bridge) just north of town on the main Highway 2 if you haven't seen them before.

From the station, the route starts with a pleasant warm-up on the Andermatt - Hospental Bikeway to acquaint you with the surrounding mountains. Once you reach Hospental, the real climbing over the pass begins. Sections of the climb use the busy Highway 2 for short distances. Wherever possible, the route follows the historical pass road which sees no (Hospental Altpassstrasse (Old Pass Road) provides a nice alternative to the busy main road) or limited (Altpassstrasse (Old Pass Road)) vehicular traffic. The former section is gravel and the latter section is mostly cobblestone. In the middle, there is a singletrack through a mountain valley, Anbetung der Kühe (Adoration of the Cows).

Take some time to enjoy the atmosphere in the Gotthardpass and revel in the accomplishment of having surmounted it on a bike. There are a number of alpine lakes in or near the pass to explore or have a bath in if it is a particularly hot day. You've earned it having climbed nearly a half mile (800 m) from Andermatt. From the pass, follow the Passo San Gottardo to Airolo forest road which begins at the eastern shore of the Lago della Piazza (Lake) just below a large fortification.

After the long ride up to the Passo San Gottardo (notice how the language switches), you may appreciate the easy cruising to be found at the outset of this forest road. It's easy cruising for six miles, a full 1000 m (3200 ft) above Airolo and the val Ticino (Valley) floor. You'll first enjoy commanding views of the old and new pass roads from Airolo up to the pass. When you turn the corner at the highest point around 11.5 miles overall, the whole val Ticino which gives the province its name opens up to you. You can probably see 20 miles down the valley and mountain peaks well beyond that.

At mile 15, you start a crazy mile where you descend 300 m (1000 ft). If you haven't checked your brakes before the ride, you'll get a good chance to check them here! The descent continues for another four miles (about 600 m; 2000 ft) with only two short climbs to break it up. You'll pass through a few small mountain hamlets in this section (Bolla and Pautan). Once you reach Pautan, the trail follows the Torrente la Garegna (Creek) for about a mile. After that, the trail passes alternately through pasture and heavy forest until the outskirts of Airolo.

The route ends at Airolo train station which can take you back to Andermatt, or there are many hotels and restaurants in town.

Gottardpass Section I has limited singletrack, so it may not appeal to purists, but what it lacks in singletrack it makes up for in scenery, history, and the sense of accomplishment of crossing the pass, especially if you are doing all three sections of this route. And Gotthardpass Section II does offer some excellent high alpine singletrack along with more stunning views.

The Gotthardpass (Passo San Gottardo) is one of a handful of major passes over the Alps and thus has been an important trade route. The Schöllenenschlucht (Gorge) north of the pass caused traders to favor alternative passes until a bridge was built over the Reuss River in the 13th century. There is an interesting mythology behind the creation of this so-called Teufelsbrücke (Devil's Bridge), but you'll have to Google it. The Schöllenenschlucht (Gorge) and two modern day Teufelsbrücken are just north of Andermatt along Highway 2 and worth a short detour at the start of the ride if you haven't seen them.

The pass road has been rerouted and most of the traffic traveling over the pass uses the modern alignment. More traffic actually passes through a tunnel underneath the pass built in 1980. In 2016, the new Gotthard Base Tunnel (longest, deepest in the world) was opened; hopefully this will alleviate the large traffic jams that occur entering the 1980 tunnel from either side. 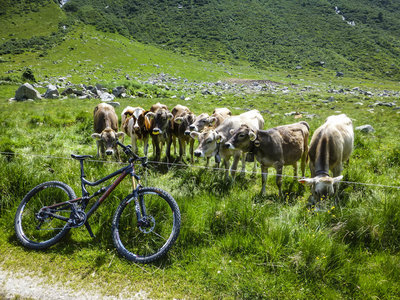 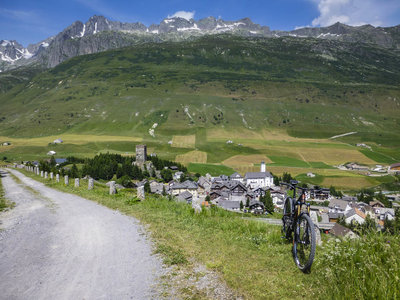 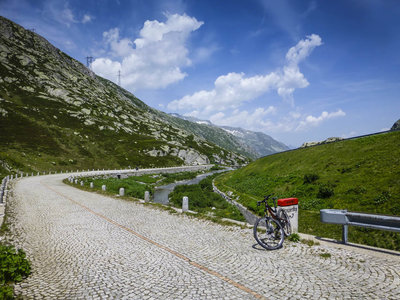