“A lift takes you to high alpine forest road and singletrack through summer grazing land. ”

This is an "easy" ride for those who don't want to do so much climbing or as an acclimating ride for the Alps. The Bedretto lift whisks you up from Airolo. You then follow a long double/singletrack high up in the Tocino Valley through summer pastureland. A steep gravel descent takes you back to the valley and then you return to Airolo on roads.

The trail is well marked with the standard Swiss red/yellow MTB trail markers as #390.

Take the Airolo cable car lift to the Pesciüm station (1st, middle stop) to the start of the ride. Cost (2018) for a one way, single use ticket is CHF 15.

From the middle station, called Pesciüm, turn right. The trail is initially a doubletrack and gravel forest road: the Strada degli Alpi (Street of the Alps).

After a short initial climb, the trail descends for the first 5 km. (3 mi.), passing by and through several farms and pastures filled with happy cows. If you see anything that looks like a large mud pit near the farms, don't ride through it - it isn't mud!

At this point, the trail becomes a singletrack and you begin a roughly 300 m. (1000-ft.) climb. So much for the "easy" part! This part of the trail is the most beautiful though passing some forested areas as well as a pristine creek with 2,500+ m. (8,200-ft.) peaks just to the south.

Around the 10 km. (6.2-mi.) mark, you'll reach the second and more pristine of the two creeks and this signals the start of the long, almost continuous 700 m. (2,300-ft.) descent. Unfortunately, the singletrack ends shortly after this at another farm. The steepest part of the descent (roughly 10% grade for 3 km., 2 mi.) begins here along a gravel road, taking you to the main highway (413) through the valley.

Cross the highway, and then follow local roads back to Airolo and the lift base. The local roads run along the Ticino River.

Just near the top of the lift, there is a great view across the valley at the famous Passo San Gottardo (Gottard Pass). The pass marks the boundary between the Italian speaking region of Ticino of Switzerland and the German speaking region to the north. There's a modern tunnel under the pass, and if you try to transit it on a busy summer weekend, you might get stuck in traffic several hours.

The Gotthardpass MTB route running over the pass and along the mountains on the other side of the valley is highly recommended. 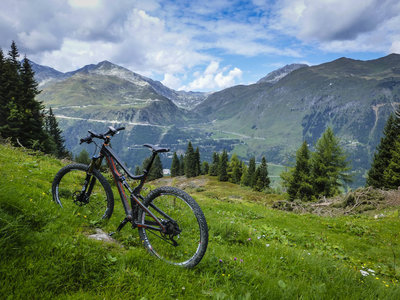