“At some point, all riders end up on this intermediate backbone of the Biology Trail System. ” Mid-Ridge is an undulating trail that is oriented North-South and is considered to the be backbone of the trail system. If you want to ride more than one trail, at some point your tires will roll onto Mid-Ridge. Due to an occasional small rock garden, short, sharp climbs with one or two roots, this Mid-Ridge is definitely an intermediate trail. It's takes a little work to get up to it but once you are up there, you have access to almost every other trail in that short 1.2 mile stretch. For seasoned beginners that take Rolling Green up to Mid-Ridge, it's a great trail to start building your way to intermediate. For Intermediates, you have immediate access to Points Unknown, Upper Copperhead, Lower Copperhead and the double black diamond, White Oak Ridge.

With all that, you can expect a little more than normal traffic on Mid-Ridge and remember that it is a two-way, singletrack trail with an occasional narrow area. Luckily, most of the trail most of the trail has nice passing lanes but I have found myself hugging a tree as I let a group pass that was traveling in the opposite direction. 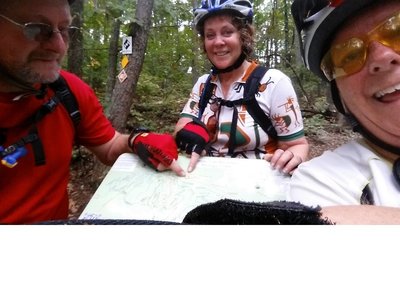 All Clear 38 days ago See History