“A ferocious climb that leads to great views of the coast and forest. ”

This route starts with a warmup along the quiet coastal road from Santa Margherita di Ligure (where there is parking) to Portofino (where there isn't). A ferocious climb then takes you up onto the main ridge through the park through olive groves with great views of the coastline behind you. Some singletrack takes you to the top of Monte Pollone (469 m; 1505 ft) and then an easy gravel path takes you along the ridge to the edge of the park. Then you take paved roads, all downhill, through the Italian countryside back to the start.

The via San Sebastiano from Monte Pallone to Portofino is one way only.

The route is accessible by train also from Santa Margherita Ligure-Portofino station. You can take bikes on regional trains (they will require a separate bicycle ticket) but generally not on the high speed trains (typically the national and international trains).

The route includes a lot of road riding and there is only a little singletrack, but this is your only chance to ride in Portofino.

The warmup along the coastal road (SP277) is right along the coast featuring great views of the Italian coastline across the bay. Portofino is a popular tourist destination and there is a cute little Italian square in the center of town. However, just before you reach the square you're looking for a steep ramped sidewalk just across from the church with "Divo Martino" above the door. A couple of switchbacks (including a few stairs) take you up to via San Sebastiano. via San Sebastiano is a brutal climb through olive groves, but there are some great views from up there. A picnic table near the top provides a nice rest point if you need it. This is also your last chance for a view of the sea. The rest of the route is through heavy forest.

At the end of via San Sebastiano, you'll pick up the Dorsale di Portofino gravel/doubletrack road. A short distance later, at the 8 km (5 mi) overall mark, turn right onto the Monte Pallone trail. This is a fun singletrack that follows the contour for about 2 km (1.2 mi) before climbing up to the summit of Monte Pallone. There are a couple wet creek crossings and the trail gets a bit technical on the climb. After reaching the summit, the trail turns back to rejoin the Dorsale di Portofino.

At this point, riding along the Dorsale di Portofino is relatively flat and easy. There is an interesting rock formation (Pietre strette, literally narrow rocks) along the way to discover. There are numerous trails that intersect at Pietre Strette, but most of them are off limits to bikes. At the end of the Dorsale, you'll come out near a grand hotel (which was strangely completely abandoned when I rode by) in Portofino Vetta. From here, it is all downhill.

From the hotel, take the only road down to the village of Ruta. In Ruta, turn right on the main SS1 road, via Aurelia. The route dates from Roman times, but is now upgraded to be the main coastal road, so expect some traffic. Follow this for about 3 km (2 mi) and then veer right onto via San Lorenzo which will take you back to Santa Margherita Ligure and the start of the ride. 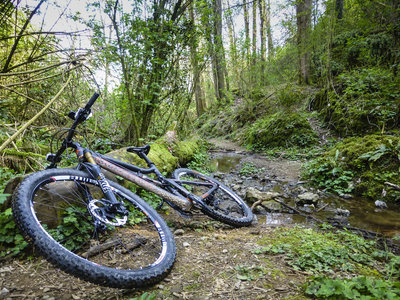 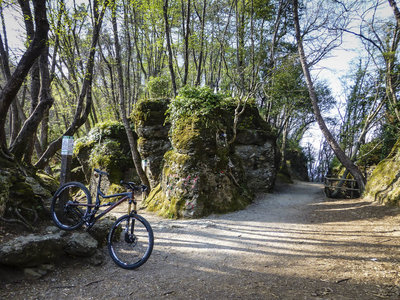 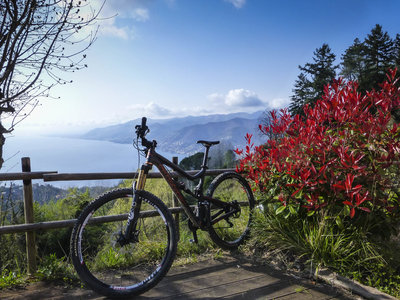