“A ride in the mountains high above the Cinque Terre coast with views of the famous "5 lands" far below. ”

This route traverses the mountains high above the famous Cinque Terre (Five Lands) coast skirting the edge of the Parco Nazionale di Cinque Terre. It is a challenging route with long climb to start, a fun singletrack in the middle, and then a quick descent.

Parts of it are shared with the Alta Via di Cinque Terre hiking trail (yield the trail to hikers!) which passes from Levanto to Portovenere following the ridge line. The more famous Percorso Azzurro hiking route (Blue Route) along the coast inside the national park is off limits to bikes and probably too difficult and too heavily trafficked to enjoy on a bike.

This trail starts at the train station in Levanto and ends at the train station in la Spezia. From here, you can take a regional train back to Levanto that also accesses the five villages comprising Cinque Terre if you happen to be staying in one of them. You should certainly visit them if you are in the area! But keep in mind it is not easy to bike between the villages - you'll have to bike along roads high up into the mountains and then down into each village.

Unfortunately, there doesn't seem to be anywhere nearby that rents mountain bikes, so you'll likely have to bring one with you. It is generally not recommended for tourists to drive into the 5 villages because the roads are difficult (particularly if you are used to North American roads) and more importantly there is very limited parking which is very expensive. The best way to arrive is by train. You can take bikes on regional trains (they will require a separate bicycle ticket) but generally not on the high speed trains (typically the national and international trains).

The ride starts basically at sea level at the train station in Levanto where there is limited parking. From there, you'll climb continuously 600 m (2000 ft) for eight miles up to the actual Alta Via di Cinque Terre. You'll have spectacular views of the coast and the Ligurian Sea which lies behind you most of the way. You'll also pass through the picturesque villages of Lazza, Lavaggiorosso, Groppo, and Dosso with their brightly painted houses.

When you pass over the provincial road SP566dir you'll have reached the half way point in the climb. Or if you ignored the advice and have access to a car, perhaps you can get a sympathetic companion to drop you at the start of the AV5T Nord and save half the initial climb. Whatever your choice, you've got another 300 m (1000 ft) to climb. When you reach a large fist-like rock at the intersection with a forest road around mile eight, you'll have reached the end of the climb. You'll also enjoy a great view of the interior of the country.

From the top of the climb, you'll have three miles of relatively flat cruising along a forest road until the route merges with the provincial road SP38 for a short distance. Although you'll pass by a small monastery (the Santuario Nostra Signora di Soviore where you can book a night) near the intersection with SP38, you must turn north on SP38 about 0.2 miles to actually see it. To continue following the ride, go south on SP38 about 1/2 mile until the intersection with the provincial road SP51. At this intersection, take the unpaved doubletrack that continues towards the east to begin the AV5T Centrale trail.

Quickly, this doubletrack becomes a singletrack through dense forest. The AV5T Centrale includes several steep climbs and descents, but none are as sustained as the initial climb from Levanto. After about a mile of singletrack, you'll cross a small road and then the AV5T Centrale trail becomes a forest road for about two miles. This works out well as this two-mile stretch includes 275 m (900 ft) of climbing.

The forest road ends at the highest point on the route at 780 m (2560 ft) near Monte Malpertuso, which is impressive considering that you started at about sea level! From here, the trail returns to singletrack until the end of the AV5T Centrale trail at the Colle di Telegrafo (Telegraph Hill). About one mile past Monte Malpertuso, you'll reach another high point at Castello (Castle). There aren't any signs of a castle here, although there is a large stone wall that might have been part of a castle later in the ride (around mile 18.5).

From Castello, you'll lose almost 150 m (500 ft) in the next mile to the Sella della Cigoletta (Cigoletta saddle). The price for this descent is a climb of approximately the same height and distance on the other side of the saddle to the top of Monte Cuna to 750 m (2460 ft). From this point, the next 16 miles are almost all downhill. At first the descent is gradual, but the last half mile into Telegrafo is a 150 m (500 ft) downhill. Colle di Telegrafo is a popular hiking destination and there is a restaurant.

From Telegrafo, the ride follows the AV5T Sud trail, which is a doubletrack. This is a relatively easy section that takes you to Campiglia which is the only town that you'll pass through the whole ride. From Campiglia, the trail follows the main road south for about one mile. Then there is a short (0.2 mi) singletrack section which takes you to another forest road. This forest road travels north a short distance before turning south again. As the road turns toward the south, you'll enjoy a great view of la Spezia and its harbor.

From here, you enjoy a continuous downhill of about 450 m (1500 ft) to sea level on the forest road including several switchbacks. You'll pass by a large military fortification on Monte Castellana, which unfortunately can't be visited. Then follow local roads and the short connector la Spezia Harbor Trail back to the train in la Spezia and take the train to Levanto. 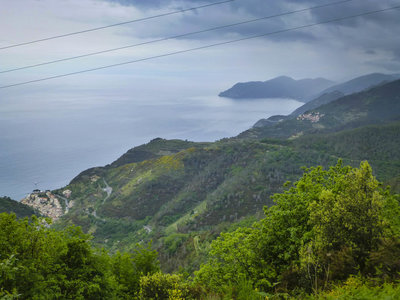 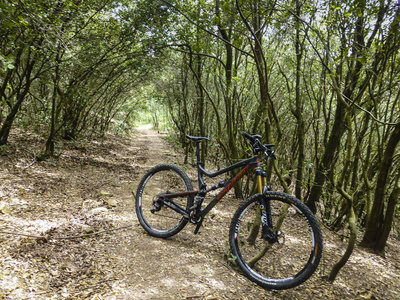 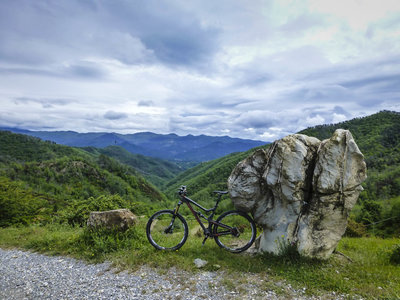