“A gravel grinder around Monte Subasio in the footsteps of St. Francis of Assisi. ”

This is a beautiful route through the Parco Regional della Monte Subasio outside the picturesque city of Assisi, Italy. Most of the route is on gravel roads but there is short singletrack high up on the mountain and a few sections on local paved roads.

The route is not technical, but the steepness will challenge some people. Overall, this loop affords the opportunity to get in tune with nature (and some substantial altitude) while getting away from the hoards of tourists in the picturesque city of Assisi (which you should in any case visit while you are in the area).

There is an awesome overlook of Assisi halfway through the ride and a second overlook at a small chapel that offers sweeping views to the south. There are a couple of Rifugi (mountain huts) that will offer refreshments during the summer season. And the route passes near an aqueduct from the Roman era.

You'll definitely want to download the .gpx for this ride or refer to the MTB Project mobile app. Many of the intersections do not have any trail markers or signs. Particularly the descent from Madonna della Spalla and the return to Assisi follow a number of unnamed farm roads through olive groves and it would be very easy to get lost.

The route starts at a parking area on the outskirts of Assisi. Head west out of the city on SP251. As soon as you pass the Porta dei Capuccini walled gate, immediately turn left onto the first gravel road called Fonte Maddalena. This climbs steadily at first through an olive grove and later through a pine forest to the Fonte Maddalena spring. When you reach the spring, cut back sharply to the right to continue climbing. (Do not go straight).

Soon this forest road intersects with the Montarone - San Giovanni (353) forest road. Congratulations, as at this point you've climbed over 400 m (1,350 ft) in 3 km (2 mi). Your reward is more climbing: turn left and continue climbing steeply. Take heart though as the grade soon slackens and starting at the 5-km (3-mi) mark, you can enjoy a long, gently curving descent to the first mountain hut, Rifugio le Banditelle. This is a nice place to stop and enjoy refreshments as *most* of the climbing is behind you.

The next segment of forest road, Banditelle - Stazzi, starts out with 1 km (0.6 mi) of 10% climbing (I only said *most* of it was behind you) to an overall height of about 1,000 m (3,300 ft) and then you can enjoy easy pedaling to the next mountain hut, Rifugio Stazzi. About halfway between the two rifugi, the forest gives way to a cleared area and you can enjoy awesome views of the surrounding Umbrian countryside. At the 16-km (10-mi) mark, continue straight at the parking area to reach the rifugio.

Just before you reach the Rifugio Stazzi, the formal route continues to the right along the Stazzi - Sassopiano doubletrack. This is an easier doubletrack along the shoulder of Monte Subasio (1,290 m; 4,232 ft) which takes you to an awesome overlook of Assisi below. A number of (mostly hiking) trails intersect at this viewpoint, so you'll want to have the MTB Project mobile app to continue on the Sassopiano - Madonna della Spella singletrack. This is 4.5km (2.8 mi) of easy, all downhill singletrack through grazing land (watch for cows and cow patties) down to a small chapel called Madonna della Spella. Here there is another great overlook towards the south.

From the chapel, you take a number of unnamed, local, mostly gravel farm roads back down to the valley. At the bottom just before you reach the paved main road SP249 (30.4 km, 18.9 mi), you can investigate the remains of a Roman aqueduct along a side trail.

Follow the route to the next segment which is the gravel Via degli Ulivi (Way of the Olive Groves). This takes you approximately to the outskirts of the little village of Capodacqua and then you follow more local gravel farm roads through more olive groves back to the start in Assisi.

Assisi is the home of the Order of Franciscan Monks founded by St. Francis of Assisi. Assisi is a beautiful town, well worth jockeying among the throngs of tourists, religious pilgrims, and monks to see. The highlight is the Basilica of Saint Francis of Assisi with its beautiful frescos. Sadly, part of the Basilica was destroyed in an earthquake in 1997 (there is an impressive video of the collapse), but much of the damage has been restored. 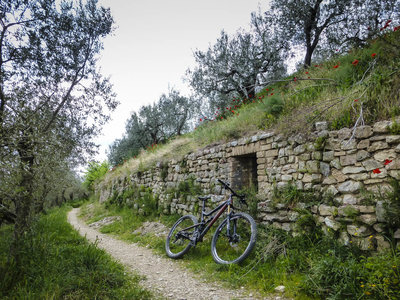 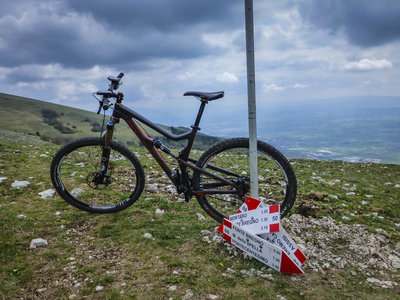 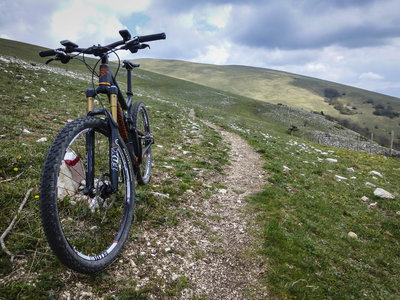 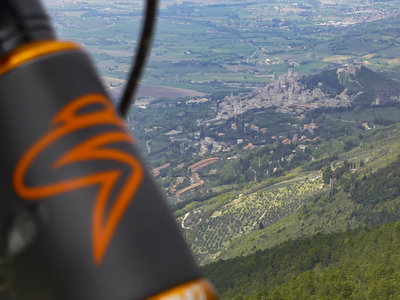