This ride connects a number of singletracks and forest roads to loop around Monte Arbostora at the far end of the Arbostora peninsula. The route is about 500 m (1,650 ft) above Lago di Lugano (lake) below. From a few places along the route, you'll have great views of the lake with the surrounding mountains in the background. At the far end of the loop, there is a great restaurant which offers a nice place for a break. Several old churches can be found along the path.

This route is well-marked with the standard red and yellow Swiss mountain biking signs as route 351, Vicania Bike. Nominally, the route begins from the Lugano Paradiso train station. Starting from the station adds 150 m (500 ft) of climbing on a steep, busy paved road. There are a few parking spaces near the start of this GPX in Pazzallo. Although well-marked with signs, it might be a good idea to download the GPX file for this ride or use the MTB Project mobile app as there are a number of confusing intersections along the route.

There are several stables along the route, so you may expect to see the occasional equestrian between Pazzallo and Santa Maria di Torello.

Around 6.5 km (4 mi), you'll come to an area where several trails intersect. Continuing straight or turning right will take you down to the lake. Instead, turn left towards the Santa Maria di Torello church/convent. The now privately-owned Santa Maria di Torello dates from the 13th century and lies in an open field. From here, a doubletrack climbs 120 m (400 ft) in 1.2 km (0.8 mi) to reach the Monte Arbostora forest road. Just to the left of this intersection lies the beautiful Madonna d'Ongero chapel dating from the 17th century which is also worth a short detour.

After visiting Madonna d'Ongero, turn back along the Monte Arbostora forest road which roughly follows the 640 m (2,100-ft) contour as it wraps around the east and southern side of Monte Arbostora (822 m; 2,697 ft). At several points along the Monte Arbostora forest road, the forest canopy breaks and you have views of Lago di Lugano and the surrounding mountains. A short climb then takes you to the Alpe Vicania area. Here there is a restaurant in the clearing, which makes a good place for a break. The restaurant has its own vineyard.

Past the restaurant, the path becomes a little bit rocky, but not too difficult as you climb 120 m (400 ft) in 1.6 km (1 mi) to the village of Pescia. This represents the high point on the loop, and afterwards you enjoy an equally steep descent back to Carona. As you descend towards Carona, you'll have great views of Monte San Salvatore (922 m; 3,024 ft), the highest point on the Arbostora peninsula. It's very prominent and distinctive with a sharp drop down towards the lake. Just before you reach Carona, you'll pass through the Parco San Grato. The Parco San Grato is a botanical garden with a collection of azaleas, rhododendrons, and conifers. There a a number of hiking paths through the park that are closed to bikes.

Turn left on the paved via Principe for about 0.3 km (0.2 mi) and then left towards Madonna d'Ongero. Shortly thereafter, you'll turn right on via Mauri to begin Tangenziale Carona. This is another forest road that allows you to bypass part of the main road that passes through Corona.

In Carona, you again follow the main road to Carabbia. In Carabbia, a number of local streets take you back to the Pazzallo - Carabbia singletrack, which you follow back to the start. 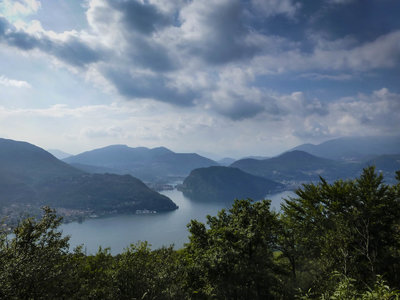 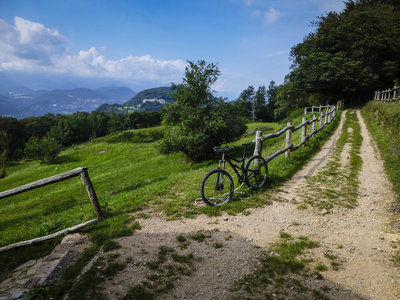