“The best way to get from Como to Bellagio - on a mountain bike along the crest of the Lario Peninsula. ”

Just the weather... it might be late April or early May before the highest reaches are snow free and then they'll be covered again in October.

This is a good way to experience one of the most beautiful lakes in Europe. The route starts in picturesque Como (where the rich and famous congregate) with a ride on the Funicolare Como-Brunate (Cable Car) to save a big chunk of climbing. But don't worry, there is still just under a full mile of climbing along this route.

The route roughly follows the main ridge of the mountains in the Lario Peninsula, which separates the two legs of Lago di Como (Lake). You'll enjoy awesome views of the lake below as well as the mountains surrounding the lake separating Italy and Switzerland. At a couple of spots along the way, you'll enjoy nearly 360° views. The ride ends in Bellagio at the tip of the peninsula (after which the hotel in Las Vegas is named). Here, you'll rub shoulders with the richer and famous-er (and a lot of tourists).

There are some fun and challenging singletrack segments along the route, including one section that is actually part of a downhill park. There's also a fair amount of forest road and the typical Italian "mulattiera" (literally mule's earth) essentially old mule roads. These are typically just wide enough for a mule drawn carriage (or the odd small Fiat 500 4×4) and the base may be dirt, cobblestone, loose rocks, or crushed stone although particularly steep sections may be armored with asphalt or a kind of homemade concrete.

The ride is done as a shuttle with the public boats which connect all the cities along the lakefront to return to Como from Bellagio. The boat trip itself is worthwhile sightseeing as the lake is surrounded by very high mountains on all sides. There are also some large and impressive mansions that dot the shoreline.

There are signs along the way for Dorsale (trail S1) to guide you. However, this is the hiking route and it typically goes directly over each peak on some very steep trails. The recommended MTB route shown here typically takes paths just below the peaks.

Como is easily reached from Milan on the regional trains, or there are parking garages in Como but expect to pay a lot to park. If you're taking the train, you'll need a separate (2nd class) fare for the bike on the train, or you can buy a bike supplement for 3 Euros (2017) that is valid for 24 hours after validation on all of the regional trains within the province of Lombardia.

Taking the boat back from Bellagio to Como takes some preplanning. Bikes are only allowed on the slow boats so the return trip to Como on the boat will take about two hours but it is extremely scenic and worthwhile on its own merit. You can buy tickets at the dock in Bellagio, but check the timetable.

This ride is best accessed from Como using the Funicolare Brunate (Mountain Cable Car), which whisks you up nearly 500 m (1650 ft) in about 10 minutes, the alternative being to climb some very steep roads from the level of Lago di Como (Lake).

The funicolare deposits you in the central plaza of the small town of Brunate. From Brunate, DTL: Brunate - Monte Boletto leads you to the village of San Maurizio with its Faro Voltiano, a 29 m (100 ft) lighthouse which offers panoramic views of Lago di Como and the Alps to the north.

From San Maurizio, continue climbing and shortly thereafter the pavement gives way to the gravelly rockiness typical of a mulattiera. This continues the climb following the ridgeline past several Baite (chalets), some of which offer refreshments in the summer. With the passing of each Baita, the mulattiera becomes more and more rough and there are a couple of sections that are particularly steep. At around 3.5 miles, you'll reach a final Baita (Baita Boletto) and just beyond that the mulattiera forks into two singletracks: DTL: Sentiero dei Faggi (Trail of the Beech Trees) and Monte Boletto Sud (Monte Boletto South).

You'll want to take the left fork for DTL: Sentiero dei Faggi (Trail of the Beech Trees). This is one of the highlight segments of this ride. The singletrack is particularly narrow in parts and it runs through a dense forest canopy at a relatively constant elevation high above the lake. There are a number of root-strewn obstacles to surmount, but nothing too difficult. Segments of this singletrack have a pretty good cross slope such that a fall could have some consequences, but not catastrophically so and anyways the trees will probably break your fall. In a few places, the forest canopy breaks up just enough to get a pretty awesome panorama of Lago di Como approximately 900 m (3000 ft) below.

Along the next segment, DTL: Mulattiera Alta (High Mulepath), the route passes some of the highest peaks on the peninsula. The rifugio is very near the start of this segment if you find yourself in need of a break, or another 1.5 miles of climbing takes you to the rifugio Riella in the shadow of Monte Palanzone. This is another good place to stop for a refreshment as their outdoor patio acts as a balcony over Lago di Como with the Alps defining the Italian-Swiss border in the background.

Another 2.5 miles takes you to the rifugio Colma del Piano at SP44 (the only road you'll cross along the entire distance) and the next segment, DTL: Monte San Primo. The next 2.5 miles are relatively calm hovering around 1200 m (4000 ft). Then you'll reach the Colma del Bosco (Pass) below Monte Cornet and more climbing ensues. Just before you reach Monte San Primo (the highest point in the Lario Peninsula), the route continues north on DTL: Bikepark Monte San Primo Downhill just after you complete one of the big climbs near Monte Ponciv. A short (100 yard) hike-a-bike may be necessary to the top of this ridge as the trail was little washed out. But at the top of the ridge, and incredible view of Bellagio and the three legs of Lago di Como (Lake) lies below you.

After the unexpected downhill run, a short road segment takes you to DTL: Paum - Alpe delle Ville, DTL: Paum - Gravedona, and DTL: Elicottero (Helicopter). These alternate steeply downhill between singletracks and gravel roads through a thick forest canopy. At the end of DTL: Elicottero (Helicopter), you'll find a definite announcement that you have reached the outskirts of Bellagio when you reach a helipad emblazoned with the town name.

From here, you can continue along paved roads down to Bellagio and the apex of the Bellagio promontory separating the two southern legs of Lago di Como (Lake), which also offers a good view of the mountains to the north. Take some time to explore the town before catching the boat back to Como. 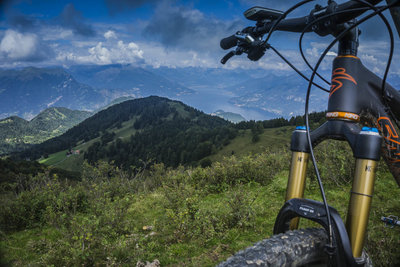 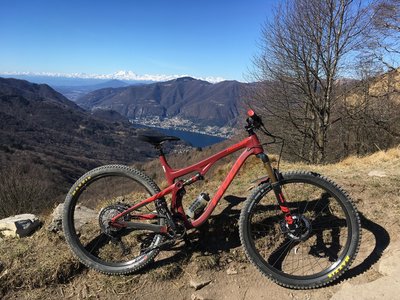 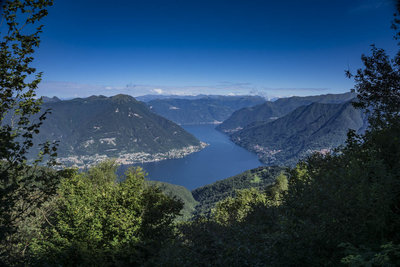 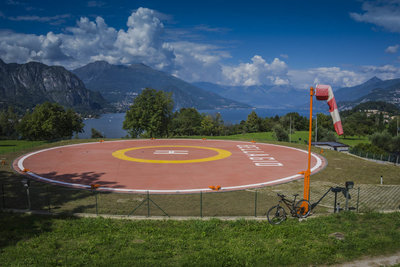