“A hodge-podge linking of singletrack, gravel, and road encircling Montevecchia, the closest foothill to Milano. ”

Milano lies in a flat plain of the Po River valley within sight of the Alps. Montevecchia (literally Old Mountain) is the closest of the foothills to Milano. The area is portected by the Parco Regionale di Montevecchia e della Valle del Curone (Regional Park of Montevecchia and the Curone Valley). Here, a forested oasis covers the hills crossed by a network of gravel and dirt roads interlaced with a number of short singletracks connecting multiple terraced vineyards.

This loop circumnavigates a large swath of the park, linking a number of these short singletracks together, although most of the loop is on gravel, forest roads, or pavement. The last quarter of the loop follows closely along the Torrente Curone stream through the forest back to the start.

This ride offers the opportunity for an after-work ride from of Milano—you can even use the commuter railway to get there. If you have more time, there is certainly much better riding farther north, but these more northern rides might also be snowbound in winter.

Although the route follows many of the designated routes in the park, there minimal signage on the ground at intersections. There are a hundred or more intersections, so you're likely to get lost without a GPS track or the MTB Project mobile app.

The route starts at a small parking area in the center of Quattro Strade, but the trail also comes close to the Cernusco Merate stop on the Milano Suburban Railway line S8, about 2km to the east along the main road SP54. Bikes are allowed on the train so long as you purchase a second ticket for the bike.

Starting in Quattro Strade, the route diverges into some fields of the local vineyard. You'll begin the first climb up the side of the Montevecchia on a gravel farm Cascina Palazzina (108 Ovest). At 2 km (1.2 mi), you reach a small park with a book box and some benches near a stream, and then you descend back down to the main road.

After passing through the center of Lomaniga, the via Cascina Albareda takes a second climb up and then down the side of Montevecchia along Cascina Olia (106B) to Cascina Albareda, Cascina Oliva, Pianetta Alta, and Pianetta Bassa (different large farms/dairies).

After a quick descent and some flat riding through the valley of the Torrente Molgoretta (stream) along Sirtori - Lomagna (106), a short but difficult 100 m (330 ft) climb begins along the Sentiero del Cancello (part of the Missaglia - Montevecchia (109) route) through a thick forest. Although it's called a trail (sentiero), the climb is along a gravel road. At the end of this climb, the first major section of singletrack along Cernusco - Missaglia (107), a little more than 1 km (0.6 mi) through the forest, is one of the more difficult parts of the loop.

The rest of the route mostly follows the main north south route through the park Nord - Sud (101). Initially, this is forest road. At the 10 km (6.3 mi) mark, this loop follows a gravel road for short distance to avoid a particularly steep climb. The loop rejoins the Nord - Sud (101) route near an impressive kiln.

Here, the loop transitions to singletrack through the forested area near the Torrente Curone (stream). This singletrack continues about 3.5 km (2.2 mi) until you reach the main provincial road SP54 that takes you back to the starting point in Quattro Strade.

The area around Montevecchia has been used for viticulture since Roman times and the hilltops are heavily terraced to take advantage of the local microclimate.

The Parrocchia S. Giovanni Battista Martire (Church) sits at the top of the Montevecchia. From its terrace there is a commanding view of Milano with (on a clear day) the Apenninies Mountains over 100 mi to the south in the background. You'll have to visit the Parrocchia without the bicycle though as there is a pretty good set of stairs leading up to them. 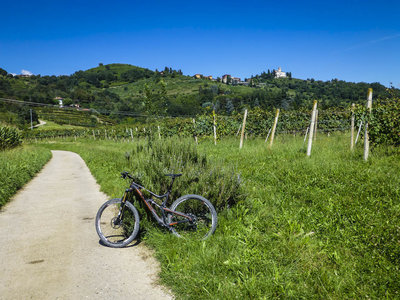