“This is the inner singletrack loop around the north and west side of town. ” This is a fairly flowy trail loop with plenty of elevation change, that runs around the west and north edge of town. It is intermediate to advanced in nature, with plenty of rock obstacles.

This ride starts by riding up Yucca and 48th street for several hundred yards, with the access to Perimeter trail from 48th street. You'll see a black gravel path turning right by a large ponderosa pine tree. The trail then wraps south through a small technical section that is rideable, then up to Perimeter. Perimeter has several sections, beginning with Technical Perimeter, that wraps around Quemazon subdivision, that then joins into West Perimeter above 48th St. Technical Perimeter is just what is says, technical. It is almost entirely rock, and has significant climbing and descending, but it is a fun section.

West Perimeter continues as a much flowier and smooth but still technical trail, until it intersects the Mitchell Trail by the water tank above Arizona St. From there East Perimeter is a fast and fairly wide descent down to the Cemetery. This ride begins at the section starting from 48th, as it follows Perimeter North to the junction of Mitchell trail, then descends to a right hand fork up to Arizona St. and the start of Woodland Trail.

Woodland is a flowy descent that undulates like a pump track. It crosses Club Rd. and Range Rd. before crossing under San Ildefonso, then going around the roundabout and crossing over San Ildefonso on the south side.

This is where Walnut Canyon Trail picks up and follows the rim of the canyon to a staircase at Diamond drive on the southwest side of the golf course. The trail is fairly level, but is made up of mostly volcanic slick rock with a fairly technical edge to it. It crosses Diamond Drive at the crosswalk and continues up Golf Course until it intersects back into Woodland Trail.

From this point you return up Perimeter trail to the parking lot at Mitchell Trail on Arizona St. 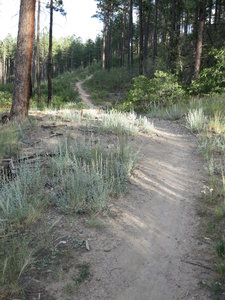 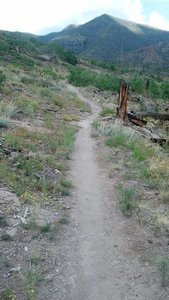