“An ATV trail that is open to mountain bikes, with an Enduro type ride feel. ” Open year round to mountain bikes.

This is a non-technical ATV width trail, not worth a drive here but if you are already here, it's one of the few trails on the Allegheny National Forest open to mountain biking. This trail can be linked to other snowmobile trails, hiking trails, and OGM access roads to make a 40-50 mile all day ride.

This trail has somewhat bermed, flowy riding, not too bad, best ridden early or late on weekends during the summer ATV season. The North loop is best clockwise against ATV traffic, and the south loop is best counter-clockwise with ATV traffic. Interaction with ATV's is generally not an issue, you can easily yield to them. The condition of the trail can vary not only to due the 4 seasons and their weather, but also by the amount of use by ATV's and the timing of trail maintenance by contractors using machinery. Typically most maintenance (which leaves soft, unrideable sections) occurs the week before the 3 big riding holidays, Memorial Day, 4th of July, and Labor Day. Once the ATV's hit it with a little moisture, the trail packs in and the loose rocks get dispersed.

Although this trail is weatherproof in terms of MTB impact, keep in mind the surface is clay and standstone so when wet it can be an aggressive grinding compound. Being a motorized trail, the surrounding area is heavy in OGM and timber activities, so if that ruins your day you'll likely want to ride someplace else such as the Tanbark and/or Morrison hiking trails.

The parking lot is at a ridgetop, so all return riding will be uphill - make sure to leave a little something in your tank.

Leaving the parking lot and heading towards the north loop, cross RT337 and follow the trail to a Y. ATV's are directed to the right, but you can head left and descend down a short rocky section. The trail then does some rolling bermed looping turns before beginning a high speed rolling descent through bermed turns and intermittent rock gardens. The turns can sometimes become deeply rutted and unusable, but generally they're in good shape. You'll drop down into a small valley and do a long steady climb up around a steep area followed by a fall line climb straight up to where the trail follows a short section alternating between OGM lease roads and trail. The trail winds along a ridgetop before dropping sharply down to its crossing of the Grunder Run stream. From there you're looking at a predominantly climbing ride with some sections being borderline fall line and likely too steep and/or technical for the average rider. The benefit is you gain altitude quickly and are soon back to rideable sections. At the top of this climb the trail climbs up through some large 20-30 foot tall exposed rocks typical of the ridgetops of this area. There are two more short, stout climbs and you'll Y back into the trail and return to the parking lot.

Riding the south loop from the parking lot, the trail has a short two-way section that then forks to the right onto one-way trial. Follow the arrows to ride the trail the same direction as motorized traffic. You'll have one of the best descents on the trail as it alternates between bermed turns and rocky descents as you drop down onto an old jeep trail. It's not uncommon to catch up to ATV's on this descent, obviously you'll want to yield to them as they are not expecting any MTB traffic to pass them. The old Jeep trail will turn into a two way secion and then back to a one-way as you start up a very steep jeep trail climb, and turn back into the woods on an ATV width trail. This climb will put you on a ridgetop, which the trail will follow for the rest of the first half of the loop.

This section is a lot of fun, very fast with an overall tendency to descend. At the end of the ridgetop, the trail descends using big bermed switchback turns that everyone enjoys and you once again can generally keep up with the occasional ATV. The trail drops down and crosses a forestry road. Across the forestry road, the trail drops out on an old rail bed and you'll have a flat spin for a good distance. The trail then alternates between old OGM lease roads and short sections of trail the rest of the way back to the parking lot while predominantly climbing.

Up until the late 80's, this trail was technical singletrack that was impossible to ride an ATV on and the southern section was just an out and back, not a loop. The Forest Service then rebuilt the trail and it's now wide and sanitized enough for a family ATV trip. 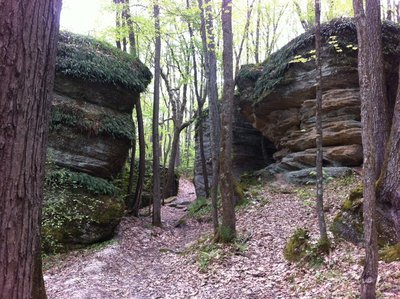 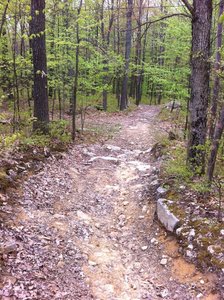 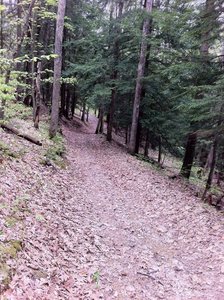 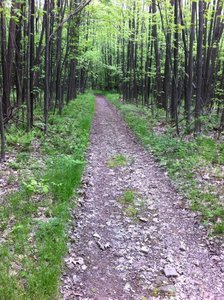 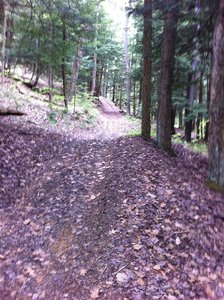 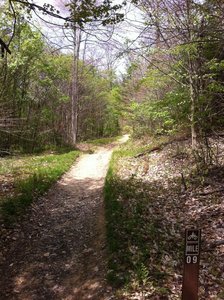