“A great cross-country tour of the Seiser Alm Plateau with beautiful views of the surrounding mountain massifs. ”

Awesome views of the Rosegarden Massif mountain group feature on this cross country loop through the Seiser Alm, the largest alpine plateau in Europe. The route passes a number of mountain huts (Hütte in German or Rifugio in Italian) where you can stop to enjoy the view and often food and drink as well.

The Rosengarten group to the west is particularly stunning with its dominant Langkofel peak at 3181 m (10437 ft), but the mountains to the south are also quite beautiful.

You can drive up and park near Kompatsch. From Selva di val Gardena, take the paved Wolkenstein - Seiser Alm #30. From Ortisei, the easiest access is to take the Ortisei - Mont Seuc lift to Seiser Alm #6, or you can ride up the Ortisei - Saltria #18 route.

Most of the route follows gravel or dirt roads primarily used to access the many farms and pastures as well as the various mountain huts on the Seiser Alm plateau.

The route is shown starting on the Wolkenstein - Seiser Alm #30 road, but you can start wherever it is convenient—see the Need to Know section for different access points. Because this route follows many different pathways, you'll want to get the GPX or be prepared to get lost as there are many roads and paths that intersect the route and the route numbers are not always marked.

This is especially true near the start of Grosses Moos #19 as the path passes through farmlands so it is easy to get lost in this area.

Kompatsch, at the 8.0 mile mark, is a small village with a number of hotels. The view panoramic view from the balcony of the Steger Dellai is notable. From Kompatsch, you'll pass the Goldknopf and Almrosenhütte mountain huts along the Kompatsch - Dialer Kirche #7 forest road. The highest point along the route is at the end of this road where you'll find the Mahlknecht Hütte.

From the Mahlknecht Hütte, consider the short climb up Tierser Alpjoch #8 to Dialer Kirche or all the way to Tierser Alp Hütte at the pass. The Dialer Kirche is a picturesque chapel set in a small thicket of trees with the Rosengarten massif directly behind it.

After the Mahlknecht Hütte, you'll enjoy a long descent through a forested area, but watch for the intersection with the Saltria - Sasso Piatto #9 forest road. From the intersection, it is a steady climb to the Zallinger Hütte with the Langkofel massif directly in front of you. Finally, a farm road doubletrack, Ochsenwald #531, takes you back to complete the loop. 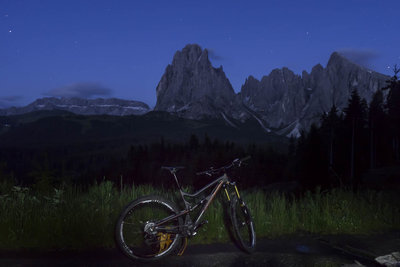 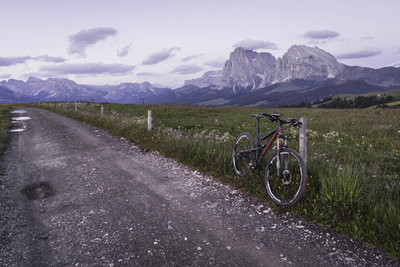