“The Sellaronda is a well-known ride in the Dolomites passing over four mountain passes using ski lifts for us mortals. ”

If you use the lifts, check the opening/closing dates and times. Since they are all run by independent ski lift authorities, they don't all open and close with the same schedule.

The Sellaronda has been practiced for years by ski enthusiasts and now mountain bikers can get in on the action. This route bisects the Trentino and Alto Adige (Südtirol in German) regions of Italy.

This route traverses four of the most famous passes in the Dolomites, circumnavigating the 3081 m (10341 ft) Piz Boe. It runs through four separate towns each with its own ski resort, and obviously you can start in any of the towns.

It's possible to do most of the climbing using ski lifts; using the lifts saves 10840 ft of climbing so that the total climbing is a much more manageable 2300 ft. Or you can ride uphill as well if you so desire, but you'll have to plot your own uphill routes since this ride assumes you're taking the lifts and you can't really ride directly under the lift line. The route can also be run in the counterclockwise direction using a different set of lifts than the ones shown here

Update August 2022: The official Sella Ronda map has some changes from the route described here namely when heading from Col Rodella you descend from the Grand Paradiso lift on a flow trail down to Plan de Gralba and from there ride down into Wal Gardena. The other difference is from the top of Areba Reba you'll descend to the bottom of the Fodom lift and take that up to Passo Pordoi. The trail is pretty well marked with orange Sella Ronda signs to tell you where to go to stay on the clockwise route (green signs are for counterclockwise).

There are multiple guiding services that offer private or group tours on this route. Either way you'll need 70-80 Euros for the lift ticket(s); this may or may not be included with the price if you hire a guide.

With a guide, the lift ticket is slightly cheaper. The website clearly lists a price for a combined Sellaronda ticket without a guide, but since this is Italy things aren't always as they seem and this was not actually available without a guide. If you speak enough Italian and German you shouldn't have any problem buying individual tickets at each lift. If you don't speak one of these languages, a guide might be cheap insurance against a(n) unanticipated climb(s).

Bike rentals can be had through the guide services or in various local shops, but it can be difficult to arrange this over the web. (Italy has the slowest internet in Europe).

Also keep in mind that it is not possible to reach this area without a car and driving in Italy can be its own adventure.

There are quite a few intersecting trails along this route. If you aren't taking a guide, you have two choices, both of which are good. You can get the GPS track here or use the MTB Project mobile app and follow it religiously or you can simply navigate in the general direction of the next town/lift following the various signposts along the way.

The GPS track starts in Selva di val Gardena (Wolkenstein in German) but this ride can be started in any of the towns (and run in reverse with a different set of lifts/trails). Take the Dantercepies bubble lift to the upper station. This drops you almost at the Passo Gardena (Gardena Pass). From here, the trail varies from singletrack, doubletrack and gravel road until the next town which is Corvara (Kurfar in German).

In Corvara, take the Col Alto chairlift and then after a short segment the Braia Fraida chairlift. Follow the trail down through a forested section to the Passo Campolongo and then take the Campolongo chairlift. Be careful again crossing the SS244. From the top of the Campolongo lift, there is a steeper downhill singletrack into the town of Arabba (no German name).

From Arabba take the Gorza cable car to the upper station. This puts you at the highest point on the Sellaronda at 2465 m (8090 ft). As you step off the lift, you'll see the snow-capped Marmolada peak, which is the highest point in the Dolomites at 3343 m (10668 ft). From the top of the Gorza cable car, follow the only gravel road down; you'll lose 1000 ft in the next 1.5 miles. You'll have great views of Piz Boe and the Sella Group all the way to Passo Pordoi.

If you want to skip the climb to the Passo Pordoi, you can continue downhill on the gravel road to SR48: turn right and follow it to the Fodom lift which will take you to the pass. But this would miss a really fun section of singletrack. Instead, after the initial 1.5 mile descent on the gravel road, continue straight onto the singletrack which begins a 500 foot climb to the Passo Pordoi. This trail has a bit of a cross-slope until you reach the SR48, so this is more challenging than the previous segments of the Sellaronda. When you reach SR48, turn left to finish the climb to Passo Pordoi, which is the highest of the four passes forming the Sellaronda at 2241 m (7350 ft).

Towards the back of the parking lot on the other side of the Passo Pordoi, there is a (mostly) singletrack that begins a 3.5 mile downhill section. Part of this trail follows the 4x downhill track, which takes you to the next town of Canazei. In Canazei, follow the SS48 about 2 mi down the valley to the next town, Campitello di Fassa.

From Campitello di Fassa take the Col Rodella cable car to the upper station. As usual, there are several rifugi (mountain huts) along the route, including two just near the top. From the cable car, take the gravel road about 0.5 mi down to the three-way intersection. Near this intersection, beware of a massive carbon fiber eating cow!

If you survive the encounter with the cow, take the singletrack that begins at the three way intersection. This will take you down to the Passo Sella and of course another rifugio. From the pass, you'll enjoy about 2 miles of relatively flat, rocky terrain before the final long downhill segment begins. It's about 6 miles, mostly downhill, and mostly singletrack. Again you'll have some fun riding through a thick forest before joining the local roads through Selva di val Gardena (Wolkenstein in German) and the Dantercepies bubble lift, where you can start all over again!

Since this is Europe be sure to enjoy a suitable beverage and a good meal at one of the many restaurants or mountain huts along the way. (I heard the coffee is good in Italy). Be mindful of the lift closing time for your last lift though.

And try not to crash looking at the scenery like I did.

This area (the regions of Trentino and Alto Adige; Südtirol in German) was part of the Austro-Hungarian empire until the end of the First World War. Heavy battles were fought in the region and many of the roads and trails in the area originally had military purposes. Memorials to fallen soldiers can be found throughout the region. Today Trentino/Alto Adige is a semi-autonomous region within Italy and German is the native language of many inhabitants but Italian is also widely spoken. 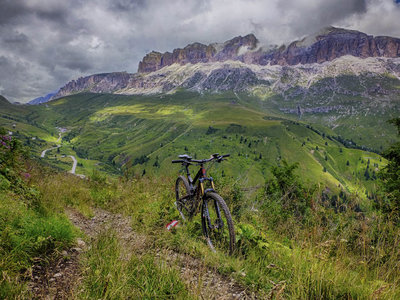 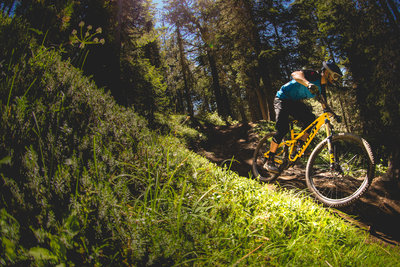 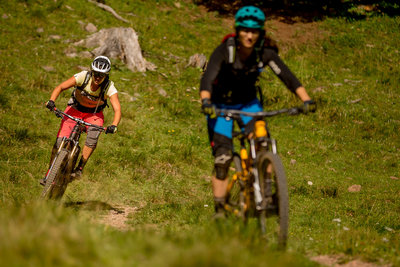 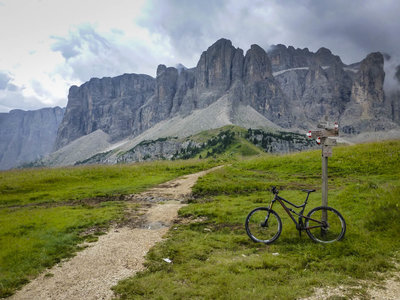 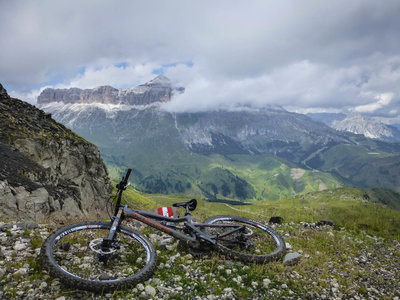