“An all singletrack adventure loops around Dow Lake at Strouds Run State Park. ”

This loop features great tight, twisty singletrack as it meanders along the contours above and later the shore of Dow Lake in Strouds Run State Park. The trail passes beneath the pine and hardwood forest around the lake and at times offers great views of the lake. There are a few roots and rocks along the path, particularly east of the lake, but you can carry good speed along most of the route. (Watch for hikers and oncoming traffic). West of the lake, a mellow trail follows close to the edge of the lake. At the north end of the lake the route drops down to Strouds Run Road near several camping/picnic areas, which offers a shortcut that shaves about 5 miles off the route.

The trail is well marked, including at most of the intersections with hiking and equestrian trails. Be sure to follow the signs carefully to stay on the mountain biking route. Most of it is beneath the dense forest foliage, except obviously in winter.

From the parking lot, head up the access road to the top of the dam.

First up is Sundown Trail. Sundown Trail is the longest and most difficult of the four individual trails that make up this loop around the lake. Nevertheless, it has good flow with lots of twists, turns, and dips. Some rooty and rocky sections provide an occasional technical challenge, but nothing a good intermediate rider can't handle. At times, you'll have a good view of the lake, but the area is especially beautiful during the sunset. You'll probably want to run the clockwise direction if you want to catch this segment at sunset though. There can be some mucky, muddy sections along Sundown Trail, particularly if it has rained recently. There is a creek crossing at about the 3.5 mile mark into the ride.

After Sundown Trail, turn left on Strouds Run Road and then quickly right onto the paved Park Road. Hollow Point Trail enters shortly thereafter to the right. Hollow Point Trail doesn't technically follow the lake, but it is a good addition to the route. Again, the most tricky part is the initial climb at the start, which includes some rocks. After the first half mile of this trail, in follows the contour pretty closely and you can enjoy the awesome flow.

Directly across State Park Road from Hollow Point Trail is the entrance to Thunderbunny Trail. Thunderbunny Trail is more of the same fast, flowing contour riding as the previous two trails, but a little easier. There are a couple of stream crossings and one really big rock (Aztec Rock). The lake comes back into view again near Aztec Rock. The last quarter mile of Thunderbunny Trail is a little tricky with a step descent and a sharp switchback before you reach a large parking lot at Strouds Run Road. This parking lot is also a good alternate starting place.

From the parking lot, look for Hickory Trail to the east. Hickory Trail is by far the easiest of the four trails around the lake, suitable for young children (and popular with families and walkers) with less than 100 feet of elevation change in 2.7 miles. Hickory Trail is only a few feet from the lake edge and only a few feet higher than the lake level for most of its length, so you'll have a really good view of the lake. If the lake is high, there are a couple of creek inlets where the trail almost runs through the lake. The trail is also pretty wide, enough for two abreast. Resist the temptation to pick up too much speed, anticipating other trail users and oncoming traffic.

Cross the dam and then the starting area is down the road to the right.

Dow Lake is named for Clarence Lorenzo Dow (1895-1955) who was instrumental in creating the park through his work on the Ohio Natural Resources Commission. He was also a professor of Geography and Geology at the nearby Ohio University in Athens. 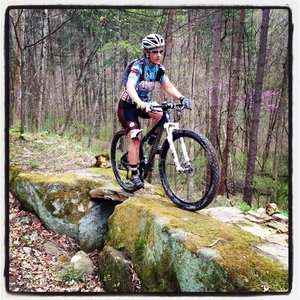 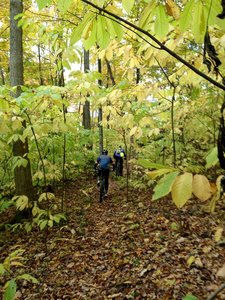 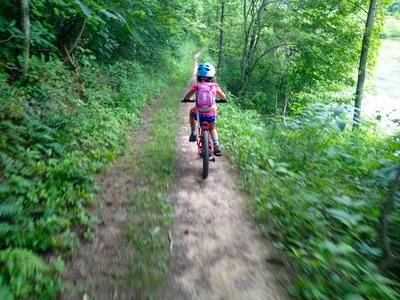 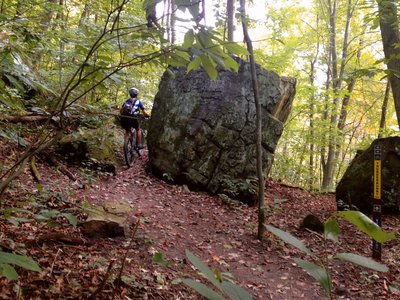 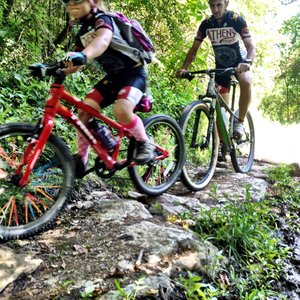 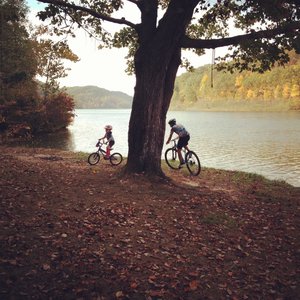