“Your reward for a long climb is sweeping views across val Susa, the ruins of an old fortress, and great singletrack. ”

This is a fantastic ride up to the main ridge of peaks separating val Susa (valley) and val Chisone. The ride starts in Sauze d'Oulx at about 1 mile (1.6 km) high and climbs through the Parco Naturale del Gran Bosco di Salbertrand (Nature Park of the Grand Forest of Salbertrand) to Gran Costa (2,615m/8,579ft), which is the highest point on the ridge.

You're well above the treeline at this point, so the view across either valley is magnificent. The area is famous for the Battle of Assietta (see history), and there are a number of fortifications in the area (which were built after the battle) that can be visited. The highlight of the route is the descent of the Strada dei Cannoni (5) which was formerly used to carry heavy artillery up to the ridge, but has now turned into a singletrack.

It is a good idea to download a GPX for this one or use the MTB Project mobile app. There are a lot of hiking trails and minor local roads, particularly at the start, and you wouldn't want to get lost riding straight up a ski hill.

Access to motor vehicles on the Assietta Road (Unpaved Section) is banned on Wednesdays and Saturdays during the months of July and August.

The ride starts in Sauze d'Oulx which gained notoriety for hosting some of the alpine ski events in the 2006 Torino Olympics. Sauze d'Oulx isn't quite a mile (1.6 km) high, but as the first half of the route is entirely climbing, it won't take long to get there. Paved roads climb to the Stazione Sperimentale alpina Vezzani in the hamlet of Richardette. The experimental station was a laboratory for local farming and forestry practices, but it now lies abandoned and in a state of decay.

From Richardette, the Lago Luane (4) trail climbs on a gravel forest road up to the Lago Alpe Luane (lake) situated in a small plateau. From the lake, you have a grand view to the north across the val Susa towards France. The lake also signals the entrance of the Parco Naturale del Gran Bosco di Salbertrand, which protects a large forest and several mountain peaks in the area. Past the lake, the trail narrows to a singletrack as it climbs through the forest towards a road junction known as the Ferro di Cavallo (horseshoe). You can figure out why it is called this.

From the Ferro di Cavallo junction, turn right on the rocky forest road Col Blegier that climbs to the Col Blegier pass at 2,381 m (7,811 ft). Just before you reach the pass, at around 9.6 km (6 mi), you reach the treeline. Here, there is a peat bog (Torbiera del Blegier) that forms an important habitat for animals and a rare carnivorous plant. Continuing on the main forest road to the right of the Torbiera, you'll shortly reach Col Blegier and the Assietta Road (Unpaved Section).

At this point, most of the sustained climbing is over and you can really enjoy the breathtaking views along 4 km (2.5 mi) of the Assietta Road (Unpaved Section). You'll traverse another major pass, the Col Lauson, at 2,488 m (8,162 ft) before reaching the short trail to the summit of Gran Costa, Batteria della Gran Costa. The trail is named for the artillery battery, barracks, and line of earthen fortifications at the top. It's a short, steep climb to the top at 2,615 m (8,579 ft), but you came all this way, so why not. And besides, the view is that much sweeter having reached the summit.

After you've conquered the batteria, return to the Assietta Road (Unpaved Section) via the Batteria della Gran Costa. Turn right and then take the Strada dei Cannoni (5) to the left after a few hundred meters/yards.

This "Road of the Cannons" was formerly used to bring heavy artillery up the mountain to the fortifications on the summit. Today, this section has "deteriorated" into a singletrack, making it perfect for mountain biking. The first 2 km (1.2 mi) of the Strada dei Cannoni (5) is above the treeline, so you've got great views of the mountains on the opposite side of the val Susa on your way down. After descending about 150 m (500 ft), you'll enter into the forest. Shortly thereafter, the grade levels off somewhat and you can cruise down to the intersection with the Col Blegier forest road.

Turn right on the Col Blegier forest road for a fast but peaceful ride through the forest back to Richardette. From there, take the same paved roads back to Sauze d'Oulx.

The area is most famous for the Battle of Assietta, fought in 1747 during the War of Austrian Succession. The battle was won by the Kingdom of Sardinia (which, although an island, included the Piedmont region on the European mainland) against the French. This begs the question why the Sardinians/Piedmontese were fighting with the French in the War of Austrian Succession, but that's for another website to answer.

There are a number of fortifications along the ridge dating from the middle ages to the 19th century. The most prominent along this route is the Batteria della Gran Costa built in 1888-1889, which although in ruins, is still quite impressive. From here, you've got great views over both valleys surrounded by the Alps. 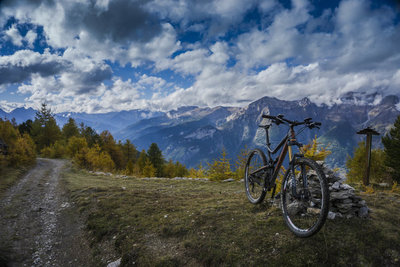 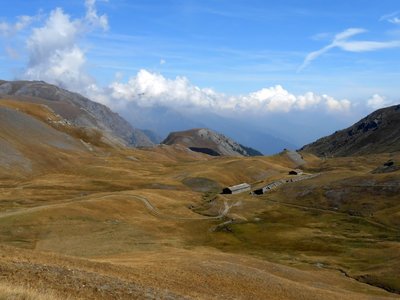 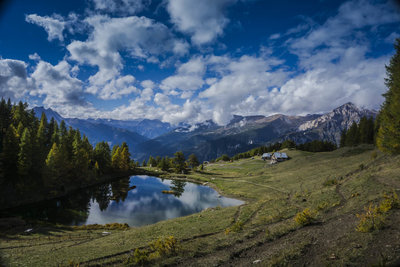