“A trail with great views of the Rio Grande gorge and the chance of seeing bighorn sheep. ”

This trail is probably best saved for hikers (of which there will be many on a nice day), but it is legal to ride it on a bike. It runs through a plain high above the Rio Grande River, which you'll sometimes be able to hear traveling through the gorge below, but the canyon walls still tower several hundred feet above you on either side.

The trail starts with a couple of stairs, and then you've got a climb and a bit of a tricky descent on a narrow trail filled with two-three inch river rocks. This drops you down into a meadow of sagebrush. There were several bighorn sheep in this meadow when I was there. In the meadow, the trail becomes a narrow ribbon of hardpacked dirt.

Near the end of the trail, there is a mudflat that will be difficult to traverse if it is not super dry, unless you have four hooves. The trail runs to the side of the flats through some small boulders. Although the trail surface is dirt, the boulders are close enough together that you can't really pedal.

Together, with a few other rocky areas that will require a short hike, you can expect to walk between 10-30% of this trail depending on how capable you are. You'll have to turn around at the end as there aren't really any options to connect this with other trails for a longer ride unless you climb NM 567 to connect with West Rim Trail or Petaca Point Trail. 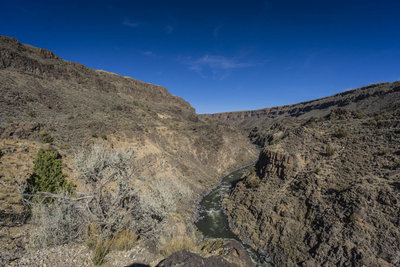 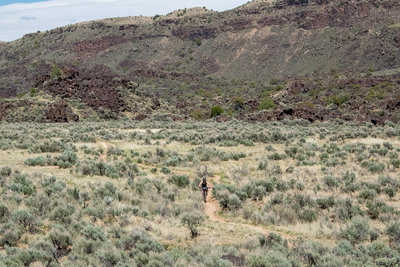 All Clear 57 days ago See History