“Sample some grand singletrack in the midst of the spectacular Palo Duro Canyon. ”

This loop is a truly GRAND experience you won't get anywhere else. Palo Duro Canyon is the second largest canyon in the US after that other one, but you can actually ride in this one. The ride starts with the challenging Comanche Trail which climbs halfway up the eastern side of the canyon offering some awesome views of the colorful rock layers in the western cliffs.

Then you'll find your way up the western side of the valley on the easier Juniper/Cliffside Trail and Capitol Peak Trail. A trip out on Lighthouse Trail to see the signature feature of the park is obligatory for first timers, although Lighthouse Trail is popular with hikers. Some backtracking takes you to Givens, Spicer & Lowry Trail which has some flowy sections as well as some short challenging climbs and technical features. A diversion on Little Fox Loop adds gratuitous mileage.

If you've had enough, Givens, Spicer & Lowry Trail takes you almost back to the starting point. Dig deep if you have to though, because you'll want to catch the northern section of Comanche Trail along the River (Prairie Dog Town Fork of the Red River - there must be a good story for that).

The ride ends with the Kiowa Trail which is similar in character to the Comanche Trail as it follows along the east side of the canyon.

Park (or stay) at the Hackberry Camp Area or alternatively at the nearby Chinaberry Day Use Area. Head south on the park road and the trail starts just after the bridge on the right. You'll loop around back under the bridge and then pickup Comanche Trail Mid. After a too-short warmup, you'll find yourself climbing a series of short punchy climbs halfway up the canyon wall. Some of these are a little technical, but the main difficulty is the steepness of the individual climbs. Soon, it's over and you find yourself in the shadow (literally early in the morning otherwise just figuratively) of the eastern canyon wall known as the Rylander Fortress.

After the initial climb, you've got some pleasant riding along the contour and some great views to the west. After a couple miles of contouring, the descent back down to the canyon floor begins. This is a series of short quick descents interrupted by short flat sections. Some of these are a little challenging and there are a couple of tight switchbacks.

At the bottom of Comanche Trail South, cross over the park road and continue another half mile until the second intersection with the park road. Turn right to cross over the river, and just beyond the bridge turn left on Juniper/Cliffside Trail. This trail is easier than Comanche and you can get some good flow. But watch out around any blind corners or blind summits as there may be oncoming traffic. Particularly in the southern half of Juniper, there are a lot of social trails that the Parks Department probably doesn't want you riding, so keep the MTB Project mobile app handy so you don't get lost.

Juniper goes by quickly and then you'll intersect with Capitol Peak Trail. Capitol Peak couples great flow with some awesome views back towards the eastern wall of the canyon. Around the 10-mile mark, you'll finish the outer loop of Capitol Peak and there is a shortcut to Lighthouse Trail if you are looking to cut mileage, but you should do the inner loop to enjoy the rest of the flow. This takes you to a parking area and the beginning of Lighthouse Trail.

Lighthouse is several feet wide and probably the most popular hike in the park. There are a couple of step-ups in this trail that make it more challenging than you expect for such a wide trail. If it's your first time, take the trail to the end for great views of the namesake lighthouse, which is an unusual rock hoodoo. You can climb up and onto the base of the "lighthouse" for an awesome view of the park, but you'll have to stash the bikes and hike the last half mile. The hike is quite the rock scramble and includes some steep, sandy chutes.

Make your way back to the junction with the Givens, Spicer & Lowry Trail (GSL). GSL is another great trail at Palo Duro. The trail starts out in cottonwood flats and you can make good progress. Shortly after you cross the Sunday Creek Wash, turn left onto Little Fox Loop because, why not?

Little Fox is a fast trail with a couple of dips where it crosses Little Sunday Creek several times. Little Fox lollipops back to GSL. Turn left to continue on your merry way. About 2.0 miles into GSL, you'll have another good view of the lighthouse if you think to look back. This second half of GSL is also more technical with some punchy climbs, a few rocks, and some switchbacks.

The end of GSL is near the starting point if you're toasted (Texas IS hot). The next section, Comanche Trail North, runs through some scraggly trees (shade!) beneath some overhanging cliffs (more shade!) feet from the river. Comanche takes you to the Mack Dick Pavilion. Kiowa Trail starts at the far end of the parking lot. Kiowa is a newer trail that crosses back over the creek against the eastern canyon wall. Kiowa takes you to Hackberry Camp Ground. Past Hackberry Kiowa becomes more difficult as it climbs to Comanche. Particularly notable is a series of 5-6 switchbacks in quick succession along the climb. Turn right on Comanche to complete the ride with a final descent.

Palo Duro Canyon State Park is the second largest in Texas after Big Bend Ranch State Park (which also has excellent mountain biking). The scenery represents an interesting lesson in geology, and you can see the handiwork of the CCC in the park architecture.

The Battle of Palo Duro between the US Calvary and the Plains Indians on 28 Sept. 1874 more or less ended the presence of the Indians in the panhandle. The cavalry captured most of the supplies and horses belonging to the Indians and they were left with no alternative but to return to the reservation in Oklahoma.

Later, the land became part of the JA Ranch owned by Charles Goodnight, which encompassed a large fraction of the panhandle. Caprock Canyons State Park, 50 miles as the crow flies to the southeast, was also part of the ranch at one time. Goodnight was instrumental in saving the bison from extinction and the descendants of the Goodnight buffalo herd now reside in Caprock Canyons as the Texas State Buffalo Herd. 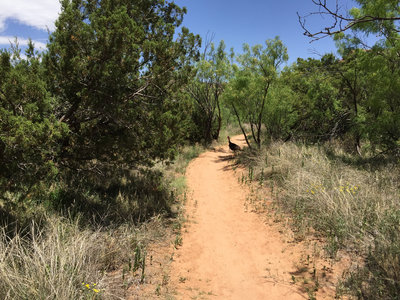 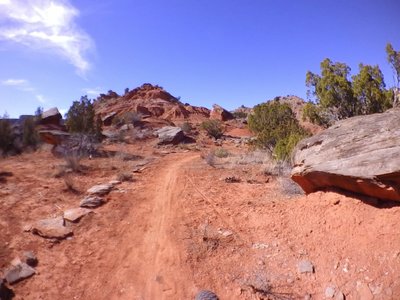 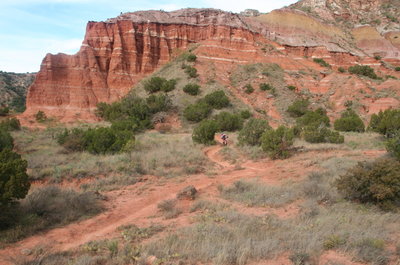 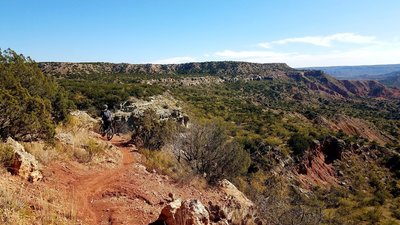 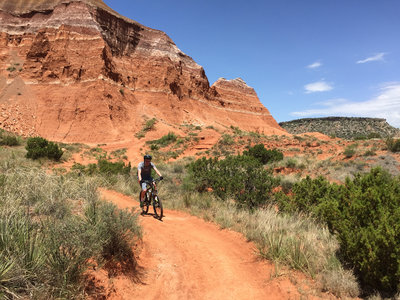 All Clear 18 days ago See History