“A challenging ride from Sin City to Utah's Dixie on 4x4 tracks, some pavement, and the very rugged Virgin Mountains. ”

Water resources are limited on this section, so plan ahead, especially when leaving Mesquite - there’s only one reliable source (mile 160) between there and St. George (mile 203). Fortunately, Cougar Spring is located nearly at the high point of the segment in the Virgin Mountains.

Sin City and Utah’s Dixie, St. George are two cities with very different atmospheres and histories. What they have in common is that both are built in rather unlikely desert locations. The first segment of the Plateau Passage connects these towns via Lake Mead National Recreation Area, the Virgin River corridor, and the rocky Virgin Mountains. Be prepared for dry desert riding through the eastern edge of the Mojave Desert.

After starting through the suburbs of Vegas, the route crosses Las Vegas Wash, and suddenly you’re out of town and in an empty desert. The next twelve miles follows along a 4x4 road through the Rainbow Gardens canyons. The next 50 miles head through the Lake Mead National Recreation Area and along the southern edge of the Muddy Mountains, a quiet, rolling pavement stretch (the longest paved portion of the entire route). After this, you'll ride through the sandstone canyons of Valley of Fire State Park and link up to several ATV trails that wind through a stunning redrock canyon before coming to the small towns of Logandale and Overton.

Northeast of Overton, you'll climb a dirt road onto Mormon Mesa where you'll ride high above the Virgin River. The Virgin Mountains, which present the most significant challenge of this segment, stand impressively to the east. From Mormon Mesa, you'll drop down a 4x4 track that follows along powerlines for 10 miles; next up is eight miles of pavement to reach the town of Mesquite which is known for its casinos and golf courses. The town's buffet dinners and cheap motel rooms might be of more interest to bikepackers!

After Mesquite, it's time to tackle the Virgin Mountains, a climb that involves a rugged 5,000-foot elevation gain over 15 miles. You are rewarded for your efforts with a hidden Joshua tree forest and a nice spring near the top of the climb. From the summit, it is 40 miles of mostly downhill 4x4 tracks descending to the St. George Basin, home to St. George, its cotton fields, and plenty of great mountain biking. 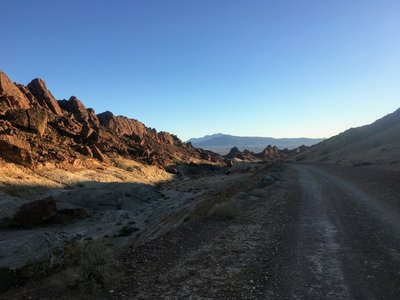