The Wrong Side of the Tracks

“A difficult climb with lots of switchbacks to above the railway, then "easy" cruising back to Weisen. ”

The first mile of this trail is brutal if you're going up, especially if you've already ridden a good bit. You'll climb a very steep singletrack (good bits above 20% grade) through a dense forest with lots of switchbacks, loose rocks, roots, etc. I envy you if you don't end up walking just a bit. It's probably more fun coming down.

Once you get past the first mile, the rest of the trail back to Davos-Weisen station is much easier with the trail hovering around 1200 m (4000 ft) above sea level. There are several short, sweet ascents/descents. This trail is very close to the main rail line for the Bernina Express, so don't be surprised to see or hear a train.

The initial climb actually crosses the path of the tracks, but you'll either pass under or over the tracks themselves so you don't have to worry about any collisions with the train.

This is part of the UN World Heritage recongized Rhätische Bahn (Rhaetian Railway) over which the Bernina Express runs, so you can check the culture box for the day too. There is a dedicated walkway on the bridge separate from the tracks, but you should dismount to cross the bridge.

From Davos-Weisen, you can take the Wiesen to Filasur trail to return to Filasur. To return to Davos, you can take the mostly singletrack Monstein to Wiesen trail although this will involve a very significant climb. There is also an easy gravel road towards Davos that passes through the Zügenschlucht (Gorge of the Trains) back to Davos-Monstein station. 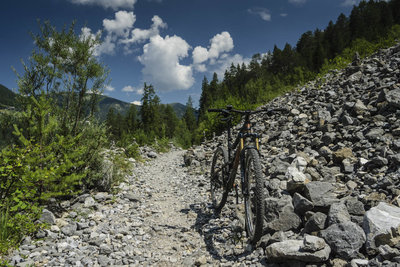