“An awesome route up and down the Sertig Valley with a lift option for those who can't/don't want to do the climbing. ”

All this is accessible with an excessively organized (otherwise it wouldn't be Swiss!) system of lifts and trains that can greatly reduce the aerobic difficulty of the ride if you are so inclined. The only downsides are that Swiss also means expensive, and the riding season is too short because it's high alpine territory.

The Rinerhorn loop is marked as route #647 starting from the center of Davos and passing through some awesome singletrack along both sides of the Sertigtal Valley. You've also got an option to take the lift to save 600 m (1500 ft) of climbing.

If you're staying in Davos, your accommodation likely comes with the Davos-Klosters pass which allows you to ride many of the lifts and use the local trains freely. You'll still have to buy an appropriate ticket for the bike.

From the center of Davos, head south along the Dammweg (Dam Road) multi-use trail which follows the Landwasser River. At the end of the Dammweg (Dam Road) multi-use trail just before the Davos-Frauenkirche station, turn left onto the road Sertigstrasse and then quickly right following the track which will take you to the Clavadel to Glaris forest road.

This forest road mostly passes through a dense forest so you won't have much of a view, but it does save you from using the busy main road in the valley. Although it looks relatively flat compared to the main climb afterward, there are two or three short climbs that will get your attention before the main climb.

The Rinerhornstrasse is a continuous, three-mile, 600 m (1500 ft) climb initially on asphalt but transitioning to gravel. You'll have lots of cows to keep you company, and you'll enjoy some spectacular views back into the valley if you stop for a moment (but only because you have to take pictures and not because the climb is difficult of course). A restaurant greets you at the top station of the lift signaling the end of the climb.

The next segment, the Sertig to Rinehorn singletrack, is the real jewel on this route and follows a portion of the Alps Trail Davos IMBA Epic. Although the EPIC ride runs this segment from Sertig to Rinehorn, the reverse direction Rinerhorn to Sertig is perhaps even better.

After an initial, gentle (60 m; 200 ft) climb over 1.5 miles, you'll enjoy 3.5 miles of continuous descending until you reach the Walserhuus restaurant deep in the valley. The singletrack is initially open with excellent views of Davos and the valley, then it passes through a forest, but before you reach the restaurant, it opens again to pastoral farmland. The singletrack is narrow, rocky, root-laden (in the forested section), has a few creek crossings, and features a couple of tight switchbacks, but most intermediate riders will enjoy most or all of the features.

When you reach the Walserhuus restaurant, it is worthwhile to take the Ducanfall Spur to see the Ducanfall waterfall if you haven't done so previously. Then continue on the Sertig to Clavadel trail on the opposite side of the Sertigtal Valley of the one which you rode in. After a short section on the Sertigstrasse road, this trail becomes a singletrack most of the way to Clavadel. This section is a little easier than the previous segment and mostly flat, so you could really pick up some speed, but be careful for hikers.

The first half of the trail is open offering views down the Sertigtal Valley and then you'll pass into a forest. Once you cross a suspension bridge over a creek, the path soon widens to become a forest road which descends steeply into Clavadel.

Once in Clavadel, follow the Davos to Clavadel forest road back to Davos. This is again a pretty easy segment and it passes through a dense forest, so there's not much to see but it avoids using the main road. Alternatively from Clavadel, you could take the Clavadel to Glaris back to the Rinerhorn lift for a second go-round. This is also recommended as you can enjoy the views on the first ride and then get more into the flow of the ride on the second. (And you've definitely got permission to take the lift for the second go-round!) 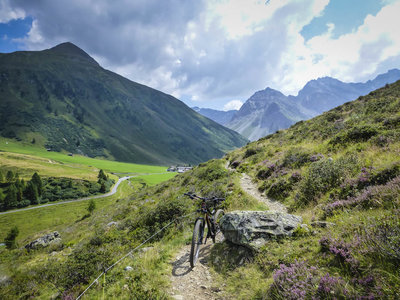 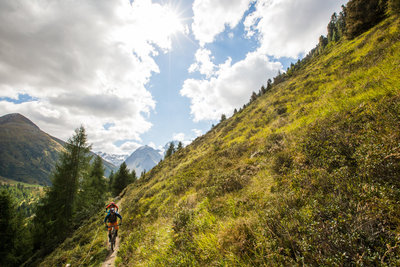 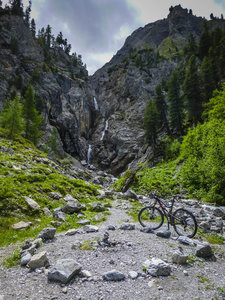 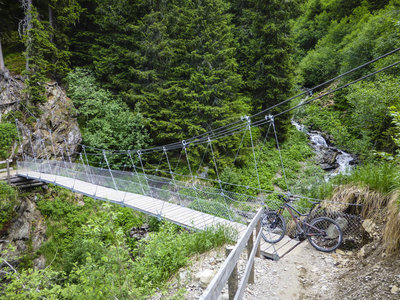