“A lift-accessed ride (if you want) including the Panoramaweg Trail high above the valley with awesome views. ”

All this is accessible with an excessively organized (otherwise it wouldn't be Swiss!) system of lifts and trains that can greatly reduce the aerobic difficulty of the ride if you are so inclined. The only downsides are that Swiss also means expensive and the riding season is too short because it's high alpine territory.

The Parsenn Trail is marked as route #332. Perhaps they should have called it Panoramaweg (Panorama Way), since it is the true highlight of the trail, but the Swiss have chosen to name it after the funicular railway that you take to the start of the ride. In theory, you could ride up from Davos on forest roads and doubletrack, but the Swiss haven't even waymarked the route this way, so the climb must be tremendously difficult.

If you're staying in Davos your accommodation likely comes with the Davos-Klosters pass which allows you to ride many of the lifts and use the local trains freely (including the Parsennbahn funicular railroad). You'll still have to buy an appropriate ticket for the bike though.

The ride down from the end of the Panoramaweg (Panorama Way) was very washed out when I did it, so coupled with the steepness you might expect to walk part of the way downhill.

From this singletrack, you'll enjoy a view of a beautiful valley. The singletrack in the valley is part of the worthwhile Durannapass loop if you're looking for another ride. This scree singletrack joins a path cut into the side of the Schiahorn mountain. The path is fairly wide, but you wouldn't want to fall off the side! Soon after finishing the path that is cut into the side of the mountain, you'll reach the Strelapass where there is a major trail junction as well as a restaurant.

From Strelapass, follow the signs to take the Panoramaweg (Panorama Way). This trail isn't called the Panorama Way for nothing; it is just awesome. The singletrack twists in and out along the side of the mountain with views of Davos and the Davosersee lake as well as the glacier covered peaks to the east.

Unlike some of the other trails in the area the climbs and descents on this trail are pretty gentle and overall the trail generally hugs the side of the mountain around 2300 m (7500 ft). So it's a pretty easy ride for those who don't want to or can't do a lot of climbing and/or descending but still with excellent views. You could really carry some speed on this trail, but it is also very popular with hikers so keep it under control.

The Panoramaweg (Panorama Way) ends at the Gotschnargrat summit where the Gotschnaboden cable car connects to the village of Klosters also offering an alternative access point. From Gotschnargrat summit, the Parsenn ride follows the Gotschnargrat Descent back towards Davos. You'll lose 450 m (1500 ft) in the first mile and a half (almost 30% grade). If the steepness isn't enough, the switchbacks in the center of this descent were very washed out when I rode it and there are just enough rocks in the trail to make it interesting.

If you aren't used to downhill riding and/or didn't bring your armor (which you certainly won't need for the rest of the ride), don't be surprised to find yourself walking part of the way downhill. After this initial 1.5 miles, the trail becomes much easier and passes into a dense forest. Soon after the trail exits the forest, you'll reach the Davos-Wolfgang station.

From the Davos-Wolfgang station, take the Davos Wolfgang connector to the Prätigauerstrasse Bikeway. This bikeway parallels the Davosersee Lake back until you reach Davos. 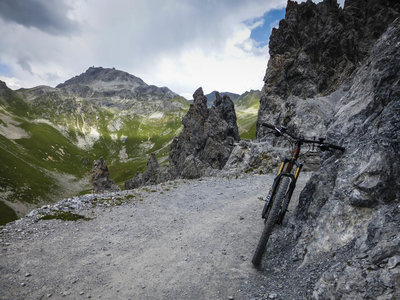 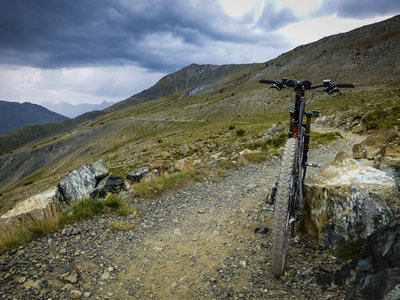 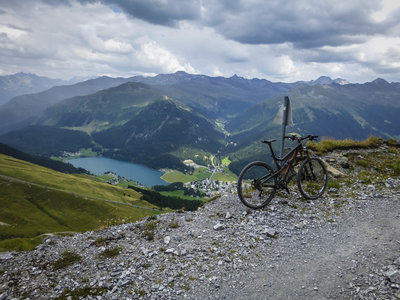 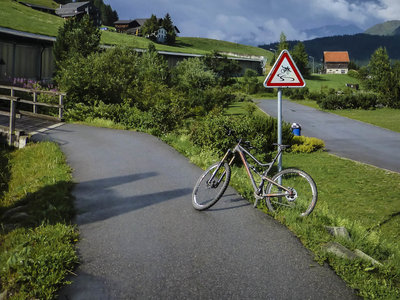