“A mostly downhill ride from the Gornergrat Peak to Zermatt. ”

Take the cogwheel railway to shuttle to the top of Gornergrat peak and then enjoy the mile long downhill to Zermatt.

Plan to take the Gornergratbahn Cogwheel railway to the top of the mountain or it is possible to ride the route in reverse. The cost is about 40 Franks (for a one way ticket, including bike fare). Or buy an all day ticket and use the railway as a shuttle. The Gornergratbahn runs every 20-30 minutes at peak in the summer.

Zermatt is a car-free city. If you drive, you'll have to park in Täsch. There is a large parking garage at the station and trains run to Zermatt every 10-20 minutes during the day. Of course the train system in Switzerland is excellent, so it may be wiser to forego a car. Just be sure to get a velo ticket (or a half fare ticket) for the bike - you don't want to be caught on the trains in Switzerland without a valid ticket.

This ride features the awesome scenery typical of Zermatt, including some striking views of the Matterhorn. The route is well marked with the nationally standardized way marker signs (the Swiss are great!). Start by taking the Gornergratbahn to the top of the mountain (3089 m; 10135 ft). It is directly in front of the main railway station in Zermatt, through which you probably entered town. Get off at the top and prepare for a long ride down.

From the train stop, follow the signs. The first segment until the Rotenboden stop is not as well defined than the rest of the trail and there are multiple lines offering differing levels of difficulty. Stay roughly parallel to the railway line until Rotenboden stop, at which point you should pass under the railway tracks just past the train stop. There is a small lake on this side of the track that offers good reflections of the Matterhorn on a calm day.

From there, continue downhill towards the Riffelberg stop where again you'll pass under the train tracks. Ride through the Riffelberg stop (or walk if there are a lot of pedestrians) and pass below the lower station for the Gifthittli lift. Continue about 1/2 mile along the trail that parallels the railway tracks until you reach a maintenance area by the tracks then cross under the railway tracks for the final time.

At this point, you have to "endure" the first of two short, gradual 200 ft climbs. From here, the trail goes deep into the Findeltal Valley.

A highlight of this segment at mile 4.7 is the Grünsee (Green Lake) where you can stop for a dip and/or to take pictures of the Matterhorn reflected in the lake. Continue toward the end of the valley toward the Gant lift station. Here, you'll cross a small bridge over the Findelbach Creek.

Now, you must endure the second of the short, gradual 200 ft climbs. At mile six, you'll pass another small lake (Moosjisee). Follow the doubletrack until the small village (Findeln). At this point, you've more or less reached the tree line and the rest of the ride is through the forest.

Around mile eight, you'll approach the Sunegga lift station. This area is very popular with hikers so be particularly aware of the potential for hikers along the rest of the route back into Zermatt.

If you make it back to town in less than an hour, you're perfectly setup to take to Gornergratbahn back up for another run! 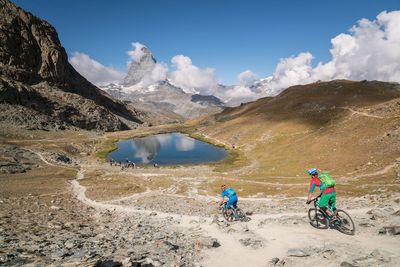 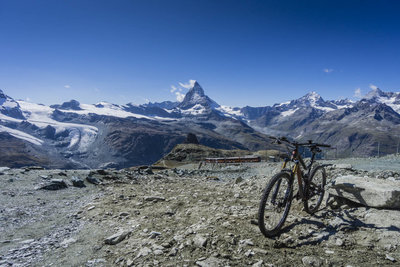 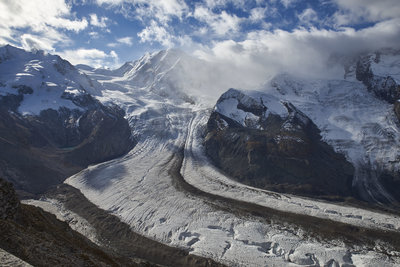