Family Friendly The first half of this trail is winding, flat, or downhill riding which most kids with some off road experience would love!

Please stay off of wet and muddy trails.

This trail is worth the drive and camp-out opportunity! The downhill section is great, the flowing flat area by the river is relaxing, the climbing and switchbacks will teach balance and skill...it's a great all around trail providing enough challenge to keep experienced riders focused, while allowing the beginners to learn.

Specific trail names come from the frontier era when Fort Scott played a role in the westward expansion, as well as the Civil War. Gunn Park Trails has been described as having two personalities, or themes, with fast flowy trails, as well as challenging bench cut areas. Although there are several trailheads throughout the park, most rides start on the Bleeding Kansas Trail (North Loop), at the trailhead adjacent to the main gate of the park, and proceed counter-clockwise through Little Big Horn (West Loop), to The Dragoon Slayer (South End), and end on Custers Last Stand (Exit Trail).

The Bleeding Kansas Trail begins with bench cut trails, into the Marmaton River bottoms, where the trail becomes fast and flowy, running adjacent to the Marmaton River. Trail features include a few log climbs, gravity drops, small bridges, and scenic views of the river.

Crossing the natural limestone overflow, takes you into The Little Big Horn Trail, where the fast, flowy theme continues into the most remote sections of the park. Keep your eyes open for the deer, turkeys, foxes, etc., that reside in these areas.

The Little Big Horn exits into the park, adjacent to the river spillway. Follow the road south for approximately 150 yards before diving into The Dragoon Slayer. Named because of the climbing involved, this trail is not recommended for newbies. Trails features include a couple of bridges, slow narrow climbs, followed by a narrow, bench cut descent that will make your heart beat faster.

The Dragoon Slayer flows immediately into Custers Last Stand, which is also the final section. This section includes the original set of rogue trails, with a couple of short downhills, creek crossings, as well as some climbing and descending switchbacks. The last climb will drop you in the parking lot.

Gunn Park was gifted to the City of Fort Scott in 1910 by the W.F. Gunn Family. With two small lakes, seven shelter houses, a well maintained campground, 18-holes of disc golf, and most recently the addition of Gunn Park Trails, it is the pride of Fort Scott and the envy of most small towns. Gunn Park Trails were started in 2009 by a local citizen, bored with road riding, and without permission from the City, who decided to build and completed 1.5 miles of riding trails in the woods. After a year of working with the City for permission, a small group of volunteers completed the additional 5 miles in just over two years, and have since hosted numerous trail events, including the Marmaton Massacre/The 2015 Kansas State MTB Championship, as well as their annual Tri-Yak-A-Thon, where participants run 4 miles, kayak for 2.5 miles on the river, and ride 6.5 miles of trails, either solo or as a relay team. 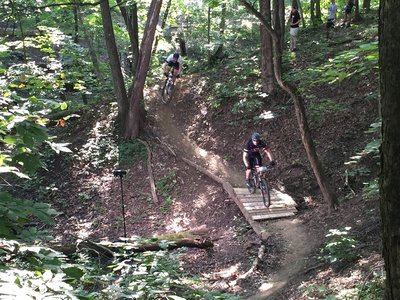 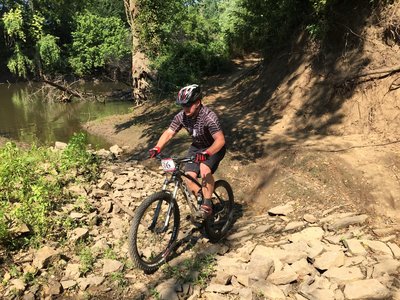 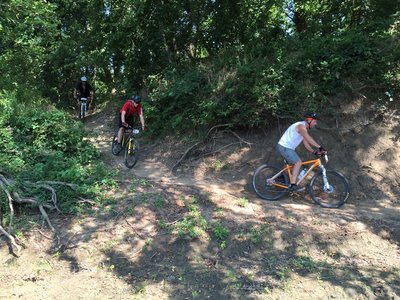 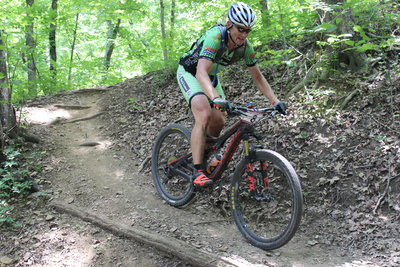 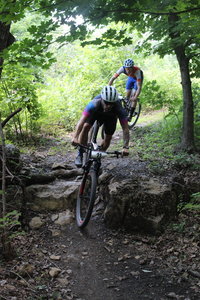 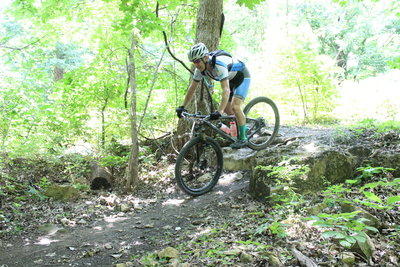