“A remote backcountry adventure on the edge of the Anaconda-Pintler Wilderness. ” An "off the beaten path" Bitterroot adventure at the headwaters of the East Fork. This ride seems to have a little bit of everything. Rolling ridgelines, meadows, route finding challenges and a blast of a descent to finish everything up.

There is a small creek hidden at the edge of the parking area to keep the beer cool in case you forgot your cooler.

The Hole in the Wall trail borders the boundary of the Anaconda-Pintler Wilderness. We have inquired at the Forest Service and they have assured us this trail is accessible to mountain bikes. Woo-Hoo!

I know the loop starts with six miles of dirt road grinding, but for some reason I never seem to mind it here. It may be that cold air has a tendency to settle into valley bottom here, and since this seems to be a fall ride for us getting up and above the inversion is a priority.

At Lick Creek saddle, take the Hole in the Wall trail to the left. If you head straight you'll head into the wilderness and that is a no-no. The next two miles ascend a series of switchbacks partially in an old burn, we do our best to clear the trees, but they have a habit of falling over. I'm always secretly glad when I find a downed tree here. It gives me a chance to catch my breath.

The next two miles roll up and down along the ridge crest, nothing to technical, but there are some sections where nature has creatively placed rocks to catch tires. Finally, you'll drop into the hole with a steep descent on loose shale.

Once in the hole, the trail markers aren't great, but you'll want to head to your left in a northerly direction. Head right and once again you'll be entering the wilderness and the opportunity for an overnighter before search and rescue finds you then fines you for being in the wrong place.

At this point you are on Bitterroot - Rock Creek Divide Trail South (313) and the most adventurous part of the ride. Expect climbs that while not long will require some pushing, trees will be down, and the trail will occasionally vanish as will challenge your route finding skills. Wolf and bear tracks are not uncommon.

At 13 miles the trail changes to doubletrack and then a primitive road. Don't miss the left-hand turn around 13.5 miles. You'll want to keep going down the grassy ridge, but the trail actually cuts into the trees. This turn and the one coming up in another half mile are more good spots to get lost, and where you'll wish you had someone with you who know the route.

So having made the previous turn the trail screams down an old road, you'll be going fast on the downhill, and it is easy to blow past the hidden fork. Having made this turn, the next turn back onto the blessed singletrack is more sketchy. Go slow, keep your eyes peeled to the left-hand side of the road, and if you are lucky you might find it. Did I mention it is best to ride with someone who knows where they are going? You have been forewarned.

Considering how hard it is to find, the Sign Creek trail is in surprisingly good condition. Are a little bit more descending and a small creek crossing, climb back and over to the Bitterroot side. At 15 miles, the trail vanishes when it enters a meadow. Sidehill across the meadow avoiding the hidden rocks until you reach a point where the clearing has a long downhill stretch. Straight line down the clearing until near the bottom the trail reappears as a finger of the meadow curves into the stand of trees on the right. Should you miss this turn, you could, in theory, follow the creek bed down, but that would probably require abandoning your bike. It would probably be smarter to climb back up and look for the trail.

Once back in the tree a steep drop takes you to a small pond. From there all that is left between you and bliss is a small climb and contouring. So dig deep in your reserves hammer that last climb and then rock the trail down to the road.

Coast down the road for the final two miles and whatever reward you stashed in the cooler.

Last century during the early days of mountain bike exploration, this was the site of one of the greatest misadventure in the local lore. Included in the story are an empty cabin, a broken window, a scavenged can of Spaghetti Os, and vomited filled shoes. 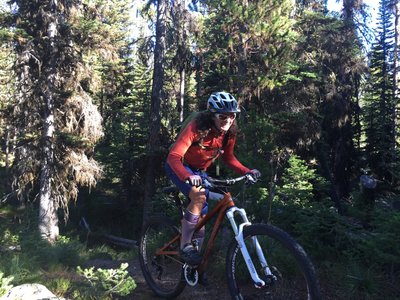 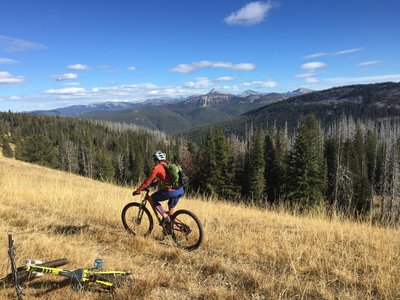 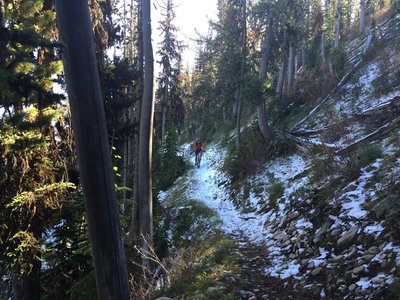 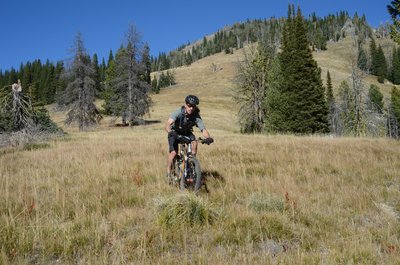