“Some pavement, some gravel, and a fantastic downhill singletrack return. ” A great choice when you only have a morning or afternoon to ride. My go-to trail when I want to introduce someone to Bitterroot riding without killing them.

Yeah, the seven miles of pavement is probably more than most people want for a mountain bike ride, but if you have to ride the black top, it might as well be up the Sleeping Child Canyon. No traffic, great scenery and shady on hot days. Take the chance to socialize while loosening up the legs.

After the pavement ends, crush your friends by hammering the consistent climb up Black Tail Road.

The downhill is mellow by Bitterroot standards, more flowy and less technical. No major rocks or roots, and usually no significant downfall. A great trail for loosening your grips on the brakes and letting gravity do it's job. Like most Bitterroot downhills, it's downhill except for when it's not, so expect a few climbs along the way.

As the trail leaves the forest and enters the grassy hills, take a break to enjoy the views of the Bitterroots across the valley.

Be careful on the switchback back down to Little Sleeping Child. They are challenging and a tumble will take you down the hill a long way.

Need a tube, some bike work, or just some advice? You'll be driving right by Red Barn Bicycles on the way to the trailhead. The Red Barn is literal. The bike shop is inside an old Red Barn, and a second home for many a wayward soul. While there, drool over the collection of classic bikes hanging from the rafters.

Park at the junction of Sleeping Child and Little Sleeping Child roads. There isn't a parking lot here, but usually a few cars can be squeezed into the pullout before the trash cans and mailboxes.

Head up Sleeping Child Road for seven and a half miles of pavement. Luckily there is little if any traffic and the canyon is shady and scenic. Turn right on to Black Tail Rd. heading to Black Tail Point (FS 273), and start climbing. There is Strava segment here for those inclined.

At about 10.75 miles the road forks. Take the right fork. Between the two forks there is also a dirt bike trail that we used to ride to add more singletrack to the loop, but in recent years the motorized traffic has left it hammered, so usually we opt for extra road miles instead.

At 13 miles the road tops out, so take a break. At the next fork keep right again and after another half mile look for the real fun to begin. I hope you didn't hammer those climbs too hard because now the real climbing begins. OK, a bit of an exaggeration, most of the climbing is behind, but the next few climbs may be short, but are the kind where you hope someone else gives up first and starts walking so that you can too, but they never do, so push your anaerobic threshold and power on! Luckily, the climbing only lasts a half mile. Take a rest on the knoll, have a bite to eat and look out toward Trapper and Como Peaks.

Nestled in the trees on the edge of the knoll is the entrance to the way down on Buttercup Trail. It starts steep to get the adrenaline going and then from here on out the trail tends downward with flowy sections interspersed enough short climbs to give everyone a chance to regroup.

At a little past 15.5 miles there is fork in the trail that used to be easy to blow by, but as the trail has become increasingly popular the right way to go has become obvious.

17 miles in you leave the forest behind and enter grassland, and the trail becomes straighter and faster. Even though there are a few more climbs along the way, the trail tends to go around rather than over most of the humps.

At 18.7 miles the trail begins the descent to Little Sleeping Child Creek. The hillside is steep, and the switchbacks steeper, a fall here would have serious consequences. The trail between the switchbacks seems to get a little narrower and off-camber every year.

Cross the creek, something that can be a challenge during spring runoff. I have been told that there is a bridge a little to the south that can be used, but it is on private land.

Coast down the road back to car. 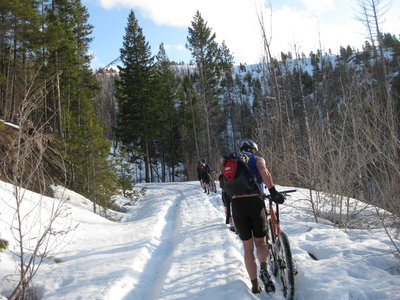 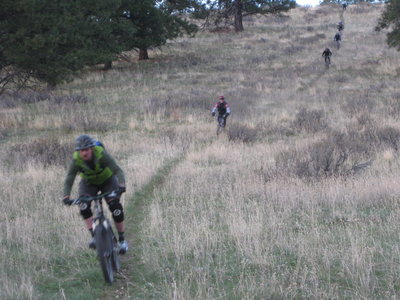 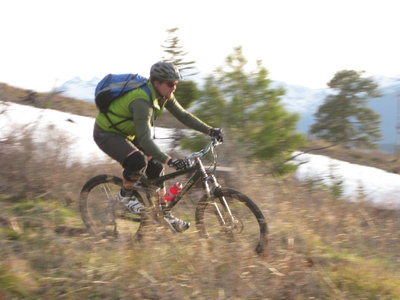