“Full pass from Glen Alps (flattop trailhead) to Indian. From wide/fast to steep/rocky. ” Be bear aware in the spring, summer and fall.

The downhill portion from the top of the pass to Indian is extremely steep and not recommended for most riders who don't want to crash over the handlebars.

Can be ridden with fatbike in winter, but the upper pass elevations might not have the snow packed down enough to be rideable on a fatbike - that area doesn't receive a ton of winter traffic.

This is an old jeep trail that leads from Glen Alps parking lot (a.k.a. Flattop Trailhead) to Indian, Alaska. Most of the trail is wide-open high-speed gravel doubletrack, but it gets steeper, rocky and interesting as it climbs to the saddle.

Almost everybody who rides Powerline turns around at the highest elevation point, the saddle above the two lakes. Optionally the rider can continue to Indian, Alaska, but the downhill on that portion is steep enough to be considered not worth riding by even experienced riders. For the portion of this trail past the saddle and down into Indian, I've "drawn in" the GPS track on a map rather than riding it so the trail shown here is approximate for that area. Check out the Powerline Pass featured ride for and out/back that turns around at the top of the pass.

Powerline is a nice ride close to Anchorage that will get you some fun rocky riding, a sweet downhill on the way back, and some great mountain views. Moose viewing opportunities abound and watch out for bears, too. Visibility is pretty wide open in the pass.

From the Flatttop Glen Alps trailhead, head east into the mountains and turn right to head up the pass. The doubletrack will keep you on the right side of the pass most of the way - most of the left turns off of this trail don't allow bikes unless you have a Middle Fork special use permit, so keep heading straight up the pass. Elevation gain is gradual as you climb the pass. The trail eventually crosses to the left side of the pass heading up - detour to the right if you want to check out a small lake.

At this point (crossing the pass) the ride gets significantly rockier, steeper, and more interesting. Watch for a fork and bear left - otherwise you'll have to walk your bike up a steep scree slope to get to the saddle. After bearing left you'll climb up a trail carved into the left side of the slope as you get to the saddle. The mountainside portion of the trail looks narrow when viewed from below, but it's plenty wide - no danger of falling off the side.

As mentioned earlier once you reach the saddle you can either turn around and head back to your car at Glen Alps or ride down into Indian. The section to Indian is extremely steep. You need to have a ride from Indian (on the Seward Highway between Anchorage and Girdwood) such as a second car for that to work. Biking back along the highway is not advisable. 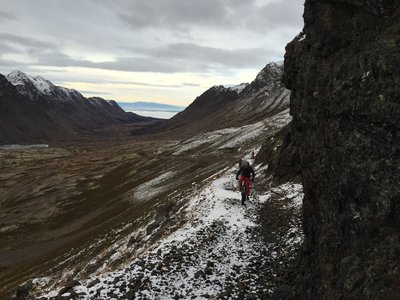