Entrance into the US Air Force Academy requires a state- or federal ID Card and may result in a vehicle search. Also, there are multiple gates across the road to contain livestock - these require a rider to dismount to open.

This is a grueling dirt road climb from its start point near the Sante Fe Trail (Ice Lake Picnic Area) to one of the higher points on the US Air Force Academy (USAFA). This road climbs and continues to climb along the southern edge of the USAFA, passing through multiple cattle gates and offering great views of the Academy and the valley below.

This road really appeals to the masochist in me. At times the road tips up to greater than 10% gradient, especially in the mid- and later portions. Although there are several less arduous grades, this route climbs with little relief until it reaches the water reservoir above the Academy. For the most part, the surface of this road is packed dirt and gravel, although some of the more challenging sections are somewhat loose and sandy. As the road goes west, it becomes significantly less well maintained, almost becoming wide singletrack by the end. Bottom line is, this road deals out punishment like a dominatrix.

The trail ends at a large artificial reservoir. Approximately 50m before it ends, a singletrack trail departs the main road heading north. This is the primary route by which to access the USAFA and AFA Falcon Trail Loop (from the Bomber). This trail can be combined with the New Santa Fe Regional Trail, AFA Falcon Trail Loop (from the Bomber), and a number of other connectors to create a variety of options.

NOTE: I have assessed this trail as Intermediate due to at least three steep grades that require a bit of bike-handling skills and aerobic fitness to conquer. Additionally, there are 3-4 gates that block the road and usually necessitate dismounting to open. 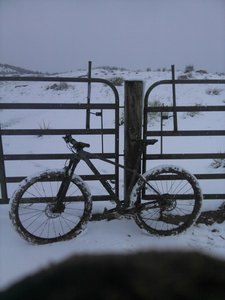