“A steep rocky road leading up Monte Sano Mountain. The toll is in the toil! ” You can't hurt this trail.

This trail is one of the more technical trails on Monte Sano. Although it's wide and not terribly steep, the fist-sized rocks placed on it for erosion control make it a difficult uphill and a bumpy downhill. Disc brakes are advised for descending on this trail. Access to this trail is recommended from the Huntsville Land Trust's Bankhead Parkway Trailhead and Parking Lot, which is approximately one-third of the way up the trail.

Built between May and August 1888, five hundred workers were paid $1.00 per day for twelve hours of work, six days a week. The train made three trips per day and took twenty minutes to travel the eight miles. Patrons paid 25 cents each way. The engine was disguised as a trolley car so that horses in downtown Huntsville wouldnt be frightened. Shortly after completion, the trains brake sand pipes choked the wheels jumped the rails and the train came to a quick stop. There was no damage to the passengers or the train, but the incident frightened potential riders. The railway was then used primarily for hauling supplies, but it went bankrupt in 1896. The tracks were salvaged and the trestles and bridges removed for firewood and building supplies.

The lower third of the trail is less rocky, but it is still technical due to roots and drops along it. It will dump you out at Toll Gate Road. This portion of the trail was used as a wagon and automobile route.

The upper two-thirds of the trail are part of the old railroad bed, and also served as a wagon road at one time. The fist-sized rocks placed on this section are what remains of the old railroad bed. Along this portion of the trail, which leads up from the Bluff Line Trail to Fearn Street and roughly parallels Bankhead Pkwy, you'll find the intersections (going uphill) with the new Gummy Line Trail, the Panther Knob Trail, the High Trail, and the connector to the Cold Spring Trail. By the time you've made the 600-foot climb up to Fearn Street, you'll have paid your toll with the toil of legs! 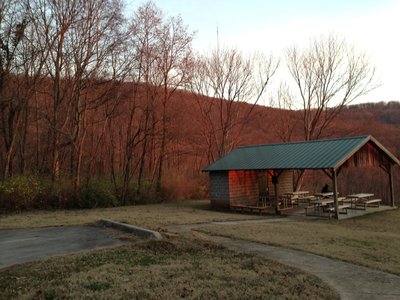 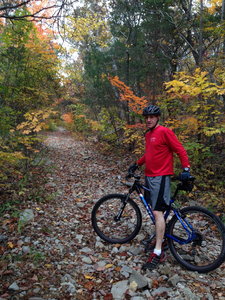