“This ride initially follows a two-track, then heads out on a deep woods singletrack. ”

The route follows a two-track for about 5 miles then accesses a great singletrack. The loop is completed on a gravel road and offers great views of distant mountains. Dense conifer and aspen forests dominate the singletrack scenery with lots of wildflowers. Elk, deer and bear are seen on this trail regularly. The singletrack receives occasional maintenance, but be prepared for deadfall, rugged stream crossings, and route-finding challenges.

If you ride this route after July 1st, you'll most-likely encounter cattle. Give them a wide berth and don't harass them. Most of the Uncompahgre Plateau is well off the grid. Excellent backcountry preparedness and orienteering skills are highly recommended. This trail is definitely in a "no-buff zone" - you'll most-likely not run into another human, let along another mountain biker. Wild flowers can get chest high and deer, elk, and bears are seen regularly. Please close all gates, or leave as found if pulled over to the fence.

The ride starts at Windy Point along the Divide Road (402). Follow the obvious marked 47 Trail (600) two-track to the southeast. This two-track rolls along on or near the escarpment of the Uncompahgre Plateau. After about 2 miles, the scenery opens up, offering great views of distant mountains including Lone Cone (elevation 12,613 feet).

Pass under Spruce Mountain (elevation 9,731 feet) at about 4 miles in, then begin to descend. While descending, pass through two cattle gates which may or not be closed. Please leave gates as found, if pulled over against the fence. The two-track varies between loose sand, mud, and/or rocky pitches.

Once on the singletrack, the route generally climbs, passing through a gate. Within 0.5 miles, the route descends through beautiful aspen groves. Be on the lookout for wildflowers, and in the fall, great seasonal colors. The route then enters an obvious clearing. Ride into the center of the clearing where an obvious trail goes uphill. There may be a directional sign at this point - sometimes the cows knock it down.

Continue on the obvious trail in a northerly direction. The route follows a narrow trail along a contour above the North Fork of Tabeguache Creek. Route-finding in this area may be difficult due to deadfall, dense trail-side vegetation, and rugged terrain. A hint is to look for notches cut in the deadfall that crossed the trail.

At about 2+ miles in on the singletrack, the trail becomes more distinct and starts a steady climb to the Divide Road. At about mile 3, the trail crosses the creek, climbs a hill to the left, then follows what remains of an old logging road. Local trail advocates have done some work on this section to make it rideable.

At mile 4, begin to climb on the old logging road. The old road has significantly naturalized to the point that it doesn't seem like a road. The singletrack finishes off with an easy pedal to the Divide Road (402). Take a left and ride to the start of the route at Windy Point. The riding is challenging -- hike-a-bike sections for most mere mortals.

The old cabin at the beginning of the singletrack is the Garvey Cow Camp. It is used by the Garvey cattle operation during the summer to house the wranglers who watch over the cattle on summer range. The Garveys are friendly to well-behaved recreationalists. Greet them with a smile and a "howdy" if you encounter them on the trail. 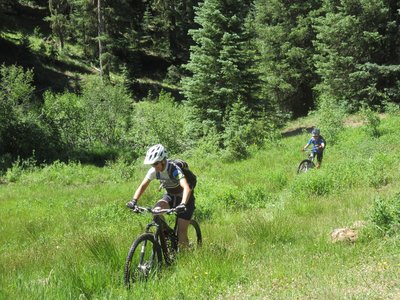 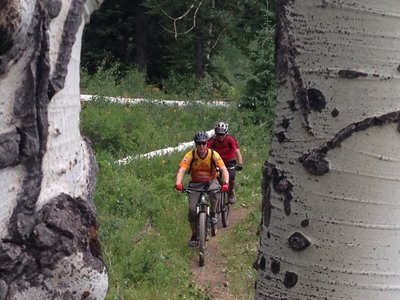 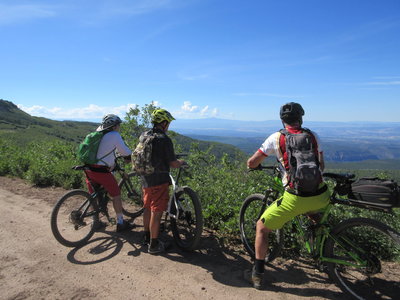 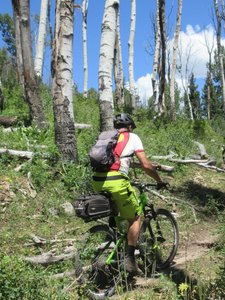 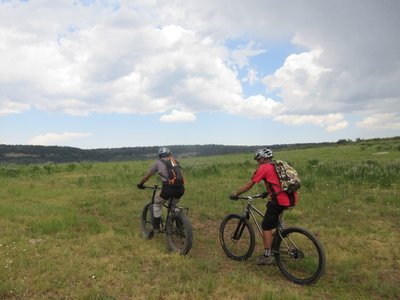 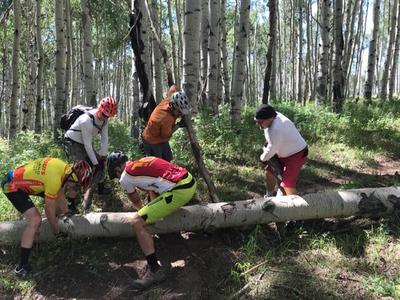