The setting for this ride is the thick forest known as the Schwarzwald (Black Forest) and with a translated name of Four Forests Tour, there is no shortage of forest in this ride.

The setting is also the state of Baden Württemburg, which has the "2 meter rule" meaning that all paths less than 2 meters wide are off limits to bikes. So there are plenty of forest roads up into the hills around the idyllic village of Gernsbach. Bring a cross country bike and you can make some really long, aerobically challenging forest road loops in the area.

This one starts with a stiff climb from the Murg River valley up to the ridge above the historical city of Baden-Baden. Then you have some easy riding up on the ridge before the descent back to Gernsbach. You'll pass a network of mountain huts up along the ridge.

This ride starts at the train station in Gernsbach. In general, the trains in Germany are very bike friendly. Most regional trains (IRE, RE, RB, S-bahn) have special cars or areas for bikes - look for the large bike symbol painted on the outside of the car. You'll need a separate ticket for the bike which should be about 5 Euro. Prohibitions may be in place during rush hour in/near major cities however. Some Intercity Express (ICE) trains also allow bikes, but you'll definitely need a reservation and separate ticket.

This route starts with 3 km (2 mi) of road riding up the Murg River valley through the towns of Scheuern and Obertsrot. There is an obligatory castle up on the hill overlooking Scheuern on the opposite bank of the Murg River but the route does not pass near to it.

In Obertsrot, you'll cross the river and begin climbing along the Obertsrot - Lindelhutte forest road. Shortly after leaving Obertsrot, the route enters the dense Schwarzwald (Black Forest), and you never really leave the forest until near the end of the route when you return to Gernsbach. It will feel as if you've left civilization behind.

Near the end of this climb (400 m; 1,300 ft of climbing at 10% grade), you mercifully come to the Lindelhütte mountain hut and a big intersection of forest roads. While there aren't any services, there is a shelter that offers a nice place to catch your breath, collect your thoughts, take a break, and/or work on your manifesto.

After the climb, you've earned some easier riding up along the ridge. Lindelhütte to Haidenell takes you to the next mountain hut, again lacking any services and again where many forest roads come together. From Haidenell, Haidenell to Nachtigal takes you to the Nachtigal (Nightingale) restaurant and Biergarten which lies on a main paved road (Badener Straße; L78).

After the restaurant, Reitweg takes you to the final mountain hut, Binsenwasenhütte (again with no services). This one does sit in a small clearing in the forest though and about 10 trails and forest roads meet at this point, so it can be a beehive of activity. There is some gentle climbing to get up to Binsenwasenhütte, but nothing like the initial climb from Obertsrot.

From the Binsenwasenhütte, a short connector takes you to the K3766 paved road and then the Staufenberg Ridge forest road descends along the ridge back to Gernsbach. Just to mix it up, the forest extends north of this trail, but looking south you've got farm fields and vineyards. Once you reach the outskirts of Gernsbach, you'll have to work your way on local roads back to the start.

Definitely grab the GPX from MTB Project from this one and/or use the MTB Project mobile app. There are numerous unmarked intersections in the forest.

If you want more miles, the Bernstein Tour starting from the same point climbs up the other side of the Murg River Valley. 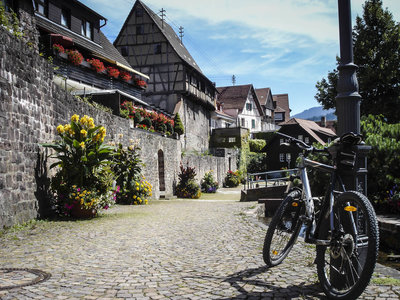 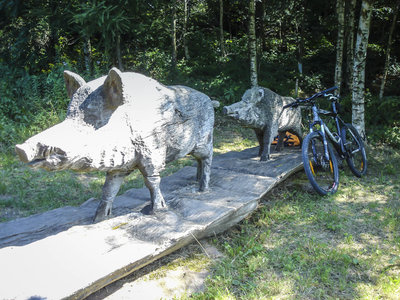