“Gravel grinder in the Black Forest passes by the ruins of a Cloister. ”

This tour is a collection of gravel and dirt forest roads connecting patches of forest on the eastern edge of the Schwarzwald (Black Forest) near the cute little city of Calw. The tour takes you to the impressive ruins of an 11th-century Cloister in the city of Hirsau. If you come in early spring, there are large fields of blooming flowers near Zavelstein.

This German state, Baden-Württemberg, doesn't allow bikes on trails less than 2 meters wide, so you have to content yourself with gravel and forest road grinders. With the exception of one steep climb leaving Hirsau, this one is not terribly difficult. Being mostly gravel and dirt forest roads, there is no technical component, but overall this is an enjoyable loop.

You'll definitely want to download the GPS for this one or make sure you have the MTB Project mobile app handy. There are a lot of intersections and turns. This route is signed as number 5 in the area, but not all of the intersections were marked.

This route begins in a small parking area in the satellite village of Wimberg. You can reach the route from the train station in Calw proper, but it will be quite a climb to the beginning.

The route follows a number of trails in the forest south of Wimberg where there is a well-developed network of trails and forest roads. After a short stint on Sonnenhangweg, turn left on Wildschweingehege. This is named for a wild pig enclosure that should be in the area, but I didn't see any wild pigs.

After that, you've got about 6 km (4 mi) on low traffic, paved local roads to get to the next large section of forest. You'll pass through a couple of villages (Weltenschwann, Altburg) using a number of local roads. Heed the earlier advice to download the GPS or use the MTB Project mobile app!

Finally, you re-enter the dense forest following Zeppelinforcheweg to Oberer Schweinbachtal. This takes you down into Hirsau in the bottom of the Nagold River Valley. Again, there is a short segment of paved roads through the city. Do take the time to explore the ruins of the Hirschau Cloister. Built in the 11-12th century, it was destroyed in 1692, but the ruins are extensive and impressive nonetheless.

After you've finished in Hirsau, you've got to climb back out of the valley. The climb on Alte Badstraße and Oberer Bruderburgweg is 1 mile of 10% grade and takes you back into the dense forest. Once you get past that, the route continues to climb at a much less noticeable grade for the next 8 km (5 mi) along Oberer Bruderburgweg and Horißweg. A short footpath leads to a cave at the intersection of these to forest roads and there is a small hut (no services) shortly after that.

After this long stretch through the forest, more local agricultural roads take you through Oberkollbach. This takes you to Kohlacherweg and Brunnenbuschweg, both back in the forest. Another short section on paved roads takes you to the next major forest segment, Heckenforstweg. This winds its way through forested area interspersed among the agricultural fields. There were a couple of impressive fields of pick-your-own flowers when I rode this in May. The fields of crocus flowers at the end of this segment near Zavelstein are apparently even more impressive in March, drawing large crowds.

From there, Zavelsteinerbrücke takes you down to an ancient bridge. This section of trail is actually narrower than most of the other forest roads used on this route, but not to the point of true singletrack. The path is neatly lined with carefully planted trees on either side, so it is particularly scenic. After you cross the old bridge, Zigeunerweg takes you first steeply downhill for 3 km (1.8 mi) before a final short climb takes you back to the beginning. 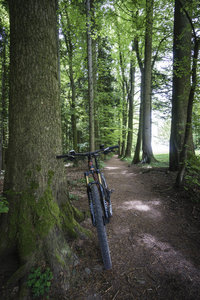 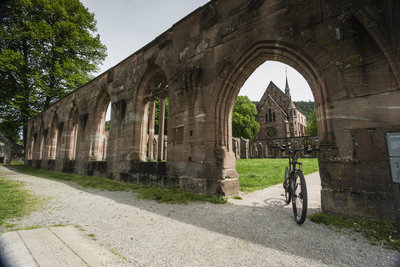 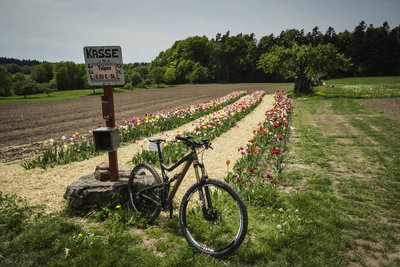