“This is the North Georgia mountain adventure you've been looking for. ”

If you've ridden all the usual suspects in Bear Mountain and Tanasi, this is a lesser-known and lesser-traveled loop with more of a backcountry feel and an adventurous fording of the Conasauga River.

The loop passes along the Georgia-Tennessee border beneath a dense forest canopy. The Iron Mountain Trail (#77) was one of the earlier trails built with mountain biking in mind in the late 90's, and it's a shame it probably gets more equestrian use now.

There are some challenging but very rideable climbs that lead to a couple of longer singletrack descents. After the second (and more difficult) fording of the Conasauga, the trail follows the shore of the river closely along an old rail bed. You'll have a great view of and access to many rapids, shoals, and swimming holes along the river. The ford (or one of the swimming holes) offers a great way to cool down on a hot summer day.

The second ford of the Conasauga River at the 7.5-mile mark is not recommended in high water (after a recent rain). I rode this on a relatively low flow day (200 cfs measured at USGS Gauge 2384500 downstream in Eton, GA: waterdata.usgs.gov/usa/nwis…), and the river was 2.5-3 ft deep. The river bed is slick and irregular, so it would be easy to get knocked down in a strong current.

This loop doesn't get that much traffic (and probably gets more equestrian than bike traffic), except near the Conasauga River Trailhead. Expect some mucked up areas near the rivers from horses and possibly/probably downed trees along the trails.

This loop is definitely recommended in the clockwise direction to avoid a difficult climb up from the Conasauga River.

The loop starts near the USFS Cottonwood Patch Campground. There is a free day use parking area just outside the campground. The singletrack starts at the back of the campground. After a third of a mile paralleling the Conasauga, you'll ford the river for the first time. This ford isn't very deep and you might survive with dry feet. The exit on the other side is a little steep and can be hard to see, but there is a good trail on the other side. Shortly after the ford, you'll cross through a wildlife clearing.

This begins a 3.5-mile section of singletrack. The singletrack is built mostly along old road beds, but the roads haven't been in use for some time, and the singletrack can be narrow in places. The trail generally climbs for the first two miles, and a couple of the short climbs are filled with loose 2-4 inch rocks, but it is all rideable.

At the two-mile mark, you begin a fun singletrack descent before climbing up to 1,500 ft at a three-way road intersection. If you want more climbing, head straight on Doogan Tower Road (FS 1) up to the site of a former fire tower, although sadly the view has become overgrown. Otherwise, there is a large wooden post at this intersection that directs the Iron Mountain Trail (#77) to the right past a gate onto Doogan Mountain Branch Road (FS 1A). About a half mile into this road section, you'll have to bear right at a road intersection and then ignore an unnamed trail with red blazes to the left. The trail follows this road until its terminus at an overlook offering views of the Cohuttas to the east.

After the overlook, another singletrack section takes you steeply down to the Conasauga, but not before you cross into Tennessee. There are a mess of interconnected trails along the river, so the MTB Project mobile app will be helpful in locating the ford. Ford the crystal clear river (see Need to Know info) and then pick up an easy singletrack along the opposite bank.

The singletrack follows a very old rail bed right along the north bank of the Conasauga. Initially, the trail is quite narrow, but it becomes increasingly wide as you travel east because it is used as an access trail for the river. While the trail is pretty flat except for a couple of the creek crossings, enough roots and rocks have made their way back into the railbed that this is definitely not a rail trail.

The riverside trail winds back into Georgia for a short distance and eventually it merges with the Conasauga Trail (#61), still following the north bank. Occasionally, short cliffs tower over you as the trail is very near the banks of the river. There are half a dozen or so small to medium creek crossings, so your feet are likely to stay wet. Some of these get messy as the trail sees some horse traffic. As you get closer to the trailhead at Peavine Sheeds Creek Road (FS 221), you can expect to see increasing numbers of people using the trail for access to the river.

At the trailhead, turn right onto Peavine Sheeds Creek Road (FS 221) and then after another half mile cross the bridge over the Jacks River (and back into Georgia) onto Old Hwy 2 (FS 16) to complete the loop. 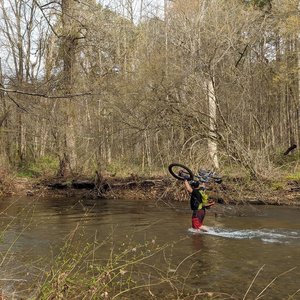 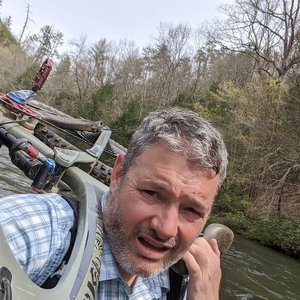 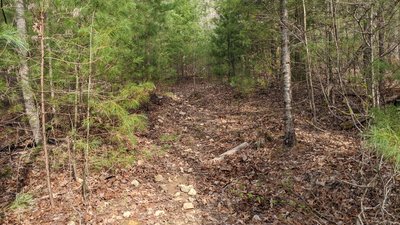 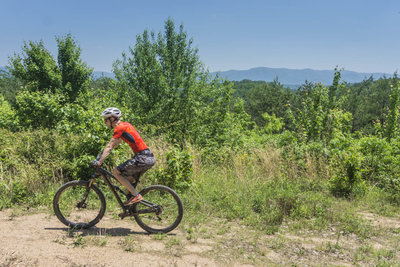 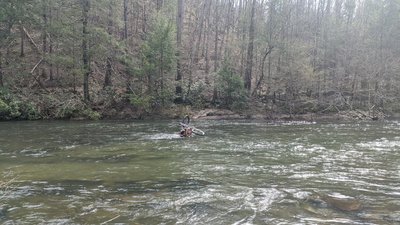 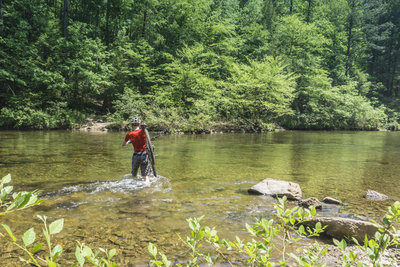