“A hard-to-follow trace that starts easy before increasing in difficulty due to rocky sections along the ridge. ”

The trail starts off easy enough, but I lost the markers and then the trail itself about 1 mile in. I had to forge a trail until I hooked into an off-shoot of Rattlesnake Run Road. Looking back, I can see I was only 1/8 of a mile from the intersection of the Old Green Ridge Road. I plan on going back and trying again, but there are sections that are too rocky for my riding enjoyment. Nevertheless, I'll take photos to document this trail.

To find the trailhead, go 1.6 miles from the junction of Rattlesnake Run and High Rock Road on High Rock Road to the first gated road on the right (Heliport Access Road). From there, enjoy the grassy doubletrack along the top of the ridge. After less than a 1/2 mile, a clearing appears, and the trailhead is straight ahead.

The smooth, grassy road is upheld once exiting the clearing, which develops into a well-defined singletrack, with leaves and sticks being a minor nuisance. Once the trail begins to climb to the rocky top, the trail no longer is enjoyable for riding. Here expect a nice walk, even pushing a bike, until one gets past all the rock sections.

As the ascent continued, the red blazes became invisible to this geezer. However, the trail is groomed by repetitive use, so I remained hopeful and followed the trough of crushed leaves. Discouragement set in as the trail continued to undulate for why I can only guess is to avoid the major rock outcrops, yet the trail is peppered with mini boulders. Upon my last ascent, I'd lost the trail. The current track follows the Open Street Map line so it is relatively accurate. 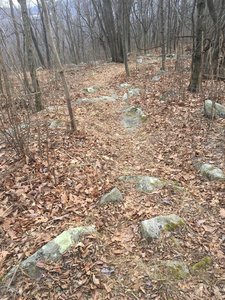