“A cross-country ride through the picturesque Estergebirge Mountains and the Finzbachtal Valley. ”

This is a peaceful cross-country ride through a pastoral mountain valley featuring views of the Esterberg and Wetterstein Mountains of Bavaria. It's mostly on forest roads since many of the trails in Bavaria under 2 m in width are off limits to bikes. There is however a one-mile segment in the middle that is significantly narrower, descends sharply, and has lots of rocks to contend with.

Garmisch-Partenkirchen is easily accessible via direct trains from München (Munich) and bike rentals are available at several businesses in town. Although some trains permit bikes for free, regulations vary by type of train, and they may not be permitted during typical commuting times. Be sure to check with a ticketing agent if you're unsure.

The GPS route shown here starts at the train station in Garmisch-Partenkirchen, but it is possible to park at the Wankbahn (Gondola Lift) parking area. You should explore the town on a bike though if you haven't had the pleasure of visiting a typical Bavarian village. Garmish-Partenkirchen is actually a confederation of two towns, so there are two separate historical downtown areas to visit.

The loop begins with an unpleasant climb of almost 550 m (1800 ft) up to the Finztalbach Valley. From the parking lot for the Wankbahn (Gondola Lift), start climbing the Wankbahnstrasse (Wankbahn Street) up the mountain. At the second switchback near the Kletterwald (Climbing Forest), turn left to continue up the mountain. At the 2.8-mile mark, there is a small chapel which provides an excuse to take a photograph so that you can get a break from the climbing.

Most of the climb is through a dense forest but occasionally the cover breaks and you enjoy a view of Garmisch-Partenkirchen in the valley below. At about 3.8 miles, the trail turns abruptly towards the east and becomes steeper. You'll "enjoy" the last 200 m (600 ft) of climbing over the next 0.6 miles until you reach the top of the valley, and then, mercifully, it is over.

Now begins the Finztalbach Trail and your reward for the difficult climb. The trail then transitions from asphalt to dirt and opens to a valley. The Almsgasthof Esterberg (Esterberg Mountain Hut) sits in the center of this valley. Here you can enjoy a well-earned beverage and meal before continuing. In case you missed the opportunity at the first mountain hut, there is a second one, Hintere Esterbergalm (literal translation - behind the Esterbergalm) about 0.8 miles later.

Beyond the two huts, you'll enjoy some solitude in this remote valley as you pedal along an easier gravel road. From the Almsgasthof Esterberg (Esterberg Mountain Hut), it climbs 50 m (150 ft) through pastoral farmland before beginning a two-mile descent approximately paralleling the Finzbach Creek. Along the way, it passes in an out of the forest with the Finzbach Creek ambling in the valley below and the Esterberg Mountains all around you. At the end of this descent, you'll cross over the creek on a small bridge. From the creek, you'll climb again until the intersection with the Bauergraben Forest Road.

After following this forest road for a short distance, you'll reach the short singletrack section, Bauergräbern (Farmer Graves). It is a very challenging, narrow singletrack descent. You'll lose 185 m (580 ft) in 0.9 miles on a trail filled with rocks and other obstacles to be avoided or jumped over.

At the end of the singletrack, turn right onto the forest road. First, you'll pass through a dense forest and then it opens up into pastureland. At 14.4 miles, you'll pass the Gschwandtnerbauer mountain hut which offers the usual fare and refreshments you'd expect at a mountain hut. From here, you'll have a great view of the Wetterstein Mountains to the south.

Continuing past the Gschwandtnerbauer mountain hut, the surface becomes paved for a short distance as you pass through the hamlet of Schlattan. Then it alternates between forest and pasture land until you approach a built-up area on the outskirts of Garmisch-Partenkirchen.

You'll follow several local roads through Garmish-Partenkirchen until you reach the the Sankt Anton Way which takes you to the Sankt Anton Cloister. Along the way are fourteen small chapels devoted to each of the Roman Catholic Stations of the Cross. Shortly thereafter, you'll reach the Kletterwald (Climbing Forest) and from here you can return to the train or your car as appropriate via whence you came. 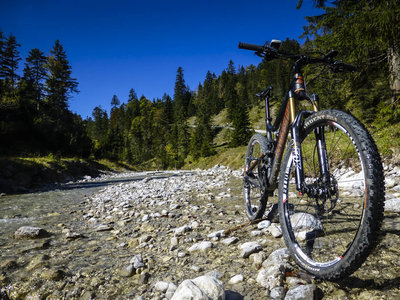 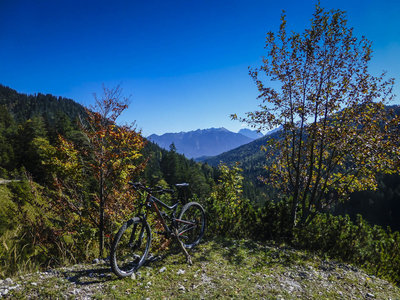 Wettersteinrunde (Loop Around the Weather Rock)