Wettersteinrunde (Loop Around the Weather Rock)

“A great day in the saddle circumnavigating the highest mountain in Germany (and crossing into Austria along the way). ”

This ride starts in Garmisch-Partenkirchen, Germany and circumnavigates the Zugspitze, which is the highest point in Germany at 2962 m (9718 ft).

Along the way, you'll pass through Austria. Unfortunately, the German state of Bavaria observes the "2 meter rule" which means that bikes are not allowed on any path under 2 meters in width, so the route is predominantly forest roads.

The ride is not technically demanding except perhaps for the very steep Wamberg segment, but this can be a lot of climbing and miles for one day. It does, however, pass through some extremely picturesque territory, notably along the southern half of the loop which passes through a remote (by European standards) valley between two mountain chains.

The route is well-marked in both Germany and Austria but the signs are different in each country.

The ride begins in the quaint village of Garmisch-Partenkirchen, site of the 1936 Winter Olympics and also of a small US military base. The first five miles follow an easy bike trail at the foot of the Zugspitze to the town of Grainau.

From there, you'll begin the first major climb of about 750 m (2500 feet) in seven miles. At mile 7.5, you can take a break in the middle of the climbing at the Eibsee Lake. There are lots of services here including a restaurant, hotel, train station (from Garmisch Partenkirchen), and a Seilbahn (cable car) to the top of the Zugspitze.

As you climb above the Eibsee, you'll have excellent views of Garmisch-Partenkirchen and the surrounding Bavarian countryside to the north. Just before the top of the climb, you'll pass into Austria and at the top of the climb is the Hochtörlehütte (High Thorn Hut). This is a great place for a meal with an appropriate beverage.

From the Hochtörlehütte, you get to go downhill for four miles into the equally quaint little village of Ehrwald, Austria. When you reach the center of Ehrwald, turn left onto Kirchplatz and follow the street up to the Ehrwalder Alm. From here, you either take the asphalted Ehrwalder Alm road or the Ehrwalder Almbahn bubble lift to the top of the mountain.

The climb from Ehrwald to the saddle is about 600 m (1900 ft) over four miles and taking the bubble lift will save 2/3 of the climbing. Just before you reach the highest point at the saddle, there are several small restaurants in case you missed the earlier chance at the Hochtörlehütte or were afraid to stop for fear that someone would expect you to pronounce the name of the hut.

Just after you begin the downhill section through the Gaistalbach Valley, you'll pass by a small lake, the Igelsee (Eagle Lake). Now you have an uninterrupted 17-mile downhill coast to look forward to along the Gaistalbach Forest Road and the Leutascher Ache Bike Trail!

At mile 28.5, you'll reach a small parking area (Parkplatz Salzbach). Just before the parking area, turn right to take the path which crosses over the Leutascher Ache (creek). Follow the bike path as it passes through several small towns until reaching the outskirts of Mittenwald, just after passing back into Germany.

From Mittenwald, there are two short, steep climbs of about 50 m (150 ft) each to reach two lakes. First, you'll reach the Lautersee (lake) before the second climb which takes you to the Ferchensee (lake). This area is popular with hikers as well and there is another restaurant on the Lautersee.

From the Ferchensee, it is downhill again until the small hamlet of Elmau. In Elmau, you'll see the Schlosshotel Elmau (Castle-Hotel Elmau), where you can stay if you have a lot of money or happen to attend summits with world leaders. From Elmau, you'll climb once more and for the final time (300 m; 600 ft) before reaching the Wamberg trail.

The first part of the Wamberg trail into the town of Wamberg is quite steep (averaging about 13% grade) but very rideable. Wamberg is the highest town in Germany and just before reaching the town, you'll have a final excellent view of Garmisch-Partenkirchen. Then, you have an even steeper (averaging about 15% grade), but also still rideable descent into Garmisch-Partenkirchen to wrap things up.

Congratulations on finishing a great loop, and hopefully the weather rock did not rain (or snow) on your ride! 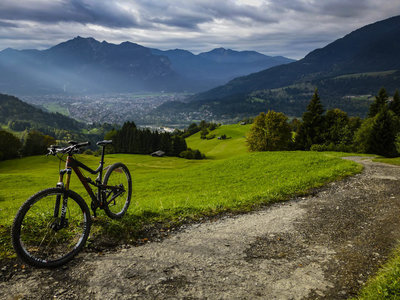 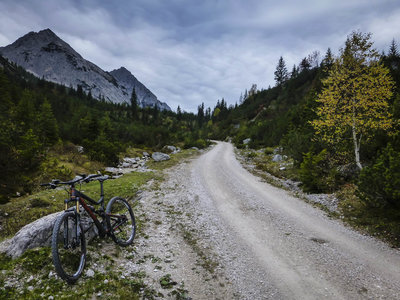 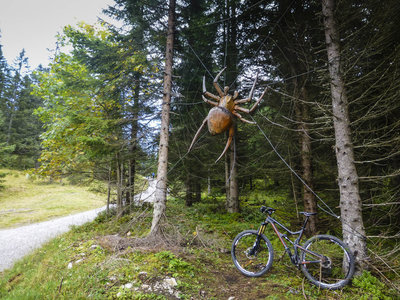 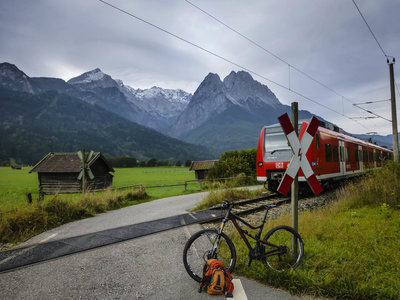 Jul 5, 2019
Chris Miksovsky
Not technical, but fantastic Bavarian scenery. Some long climbs but the mountain restaurants make it worthwhile. A great, grand route - zehr gut! 51.4mi
May 21, 2017
kristen tonsager
We caught the loop from Ehrwald and then rode to Mittenwald and couldn't reconnect the trail, so ended up making our own way to GP. 30mi
Sep 26, 2014
Lost Justpastnowhere