“This is an awesome, mostly singletrack trail through the Bernina Pass, past several alpine lakes. ”

The terrain is also particularly beautiful as you're surrounded by 3000 m (10000 ft) peaks including the 4093 m (13428 ft) Piz Bernina, the highest point in the Eastern Alps from which the Bernina Glacier extends.

From the Morteratsch station, cross the train tracks and the river and prepare for a short (0.5 mi) climb of about 20% grade. In this short, steep climb you'll pass under a stone bridge for the railway through which a waterfall tumbles. At the end of this climb, you'll exit a forest, coming to a row of very large stones neatly placed across the valley at around 1.25 miles. Presumably the Swiss placed them here to keep out invading armies.

The second section of the climb is mostly singletrack and also at a more reasonable grade, generally less than 5%.

After you reach the Bernina Diavolezza station, you can look forward to about three miles of relatively flat riding through the pass, also mostly on singletrack. When I did this ride in late June, there were still patches of snow, so if you do it earlier you may need really fat tires.

You pass the Lago Bianca (White Lake) which is dammed on both the north and south. To the north, the lake drains to the Black Sea via the Danube River and to the south it drains to the Adriatic Sea via the Po River. The Ospizio Bernina station is at the center of the lake and this provides a good reference point.

The trail continues to follow the eastern side of the lake and the railroad tracks around Lago Bianco. Just past the lake, you begin the 120 m (400 ft) steep downhill to the Alp Grüm station where this segment ends. Hopefully, you checked your brakes before the ride, especially if you are continuing onto the Alp Grüm Descent which offers another 400 m (1300 ft) of descending in 2 miles! In the last 1/2 mile before Alp Grüm station, you'll enjoy a jaw-dropping view of the Poschiavo valley below.

You'll pass two mountain huts (Belvedere and in the Alp Grüm station) where you can stop for a good meal with your favorite beverage. From either, you've got excellent views to the north of the 3900 m (12795 ft) Piz Palü with its glacier and lake. To the south, you'll have views of the val Poschiavo (Poschiavo Valley) and a preview of the Alp Grüm Descent. 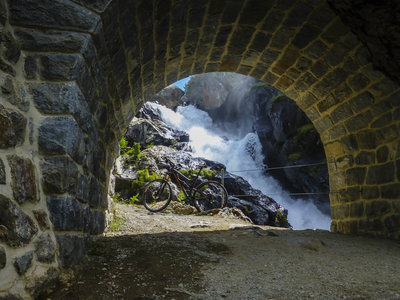 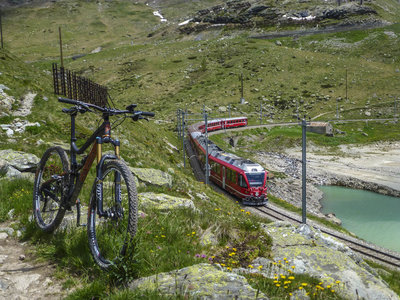