“A short ride on the south end of Green Mountain to Alum Cave. ” This ride combines the Alum Hollow Trail with two loop trails (West Plateau Loop and East Plateau Loop) at the Green Mountain Nature Preserve in Huntsville, AL, offering views of the Tennessee River from the bluffs and access to Alum Cave.

Alum Cave is not actually a cave, but rather a rock overhang shelter. Archaeological findings have revealed that the rock shelter was used by prehistoric people during the Middle Woodland period (1AD - 500AD).

This trail system continues to grow as more trails and acreage are added to the original 122 acres donated to the Land Trust of North Alabama in 2016, with plans to build a trail to connect it with Ditto Landing along the Tennessee River.

The Alum Hollow Trail continues past the West Plateau Loop intersection, but the difficulty of getting a mountain bike across two waterfalls makes this inadvisable. Perhaps a new bypass trail will be constructed above the bluff for access to trails further south around the mountain.

This ride begins and ends at the Green Mountain Preserve Trailhead on South Shawdee Road (on top of Green Mountain). From the trailhead, ride for roughly a mile on the Alum Hollow Trail, which generally follows the bluff except for a gently rolling section at the beginning of it. The trail crosses a couple streams, one of which is crossed by a wooden bridge. Although the trail is not difficult for most of this ride, there are some descents and climbs.

Just before the second stream crossing, which is not recommended for cyclists, there is an intersection. You can leave your bike here for a few minutes (lock it to a tree if worried about theft) to see the highlights of the trail nearby: the Alum Cave rock shelter (with evidence of prehistoric human use) and Alum Falls (a nice 20-foot cascade, except during periods of drought). The waterfall is visible from the trail intersection, although the rock shelter requires walking down below the bluff.

Take a ride on the West Plateau Loop, which parallels the creek for a short distance before curving eastward and winding along the north end of the preserve. This trail is relatively short and easy, and rejoins the Alum Hollow Trail west of the first creek crossing. After crossing the same bridge you crossed earlier, backtrack towards the trailhead. At the next trail intersection, turn left.

Continue along the East Plateau Loop, which is much like the other loop but slightly longer. It will dump you back on the Alum Hollow Trail, which you can then backtrack to the trailhead.

There have been archaeological digs at Alum Cave and on the bluff above it, with plenty of evidence of Native American use, dating back to 9,000 to 10,000 years BC in some locations, although the greatest usage was from the Middle Woodland Period (1,500 to 2,000 years ago). There is also an old vehicle visible below Alum Cave; no one seems to know how it got there, as there is currently no road to its location.

The 122-acre property was donated to the Land Trust of North Alabama in 2016 by Robert and Susan Kuehlthau, who are longtime residents of Green Mountain, and is in close proximity to the 72-acre Green Mountain Nature Trail property owned by the Madison County Commission. 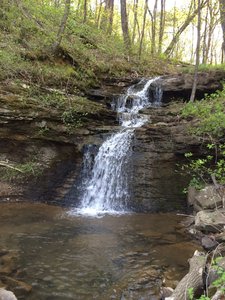 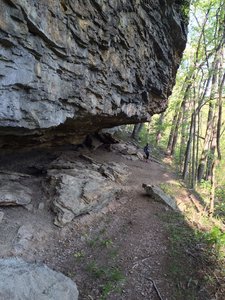 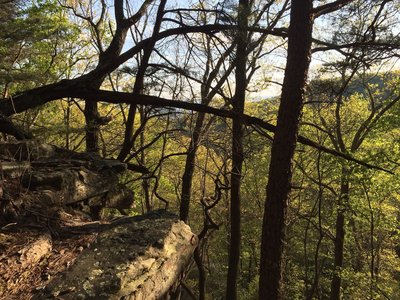 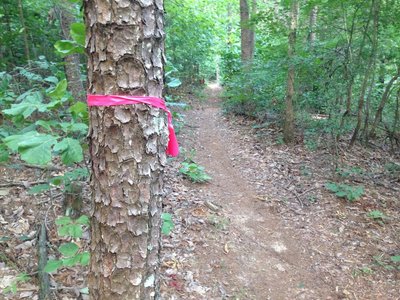