“A narrow, backwoods trail through meadows and forests. ” 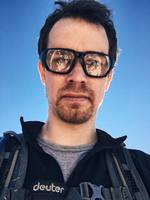 Closed to bicycles and motorcycles October 1 - May 15.

The Red Ledges Trail (019) connects from the Robertson Pasture Trail to Aspen Flat Trail (018) and is intersected in the middle by the Red Ledges Access Trail (160). The trail can be traveled in either direction, though it would be a very difficult climb.

From the upper end, the trail descends steeply as it passes in and out of the trees. Just past the half mile mark, the trail begins a steady climb that leap frogs between meadow and forest as it crosses a low ridgeline. There's plenty of opportunity to enjoy the views while ascending along narrow singletrack. Though a few tight spots and a series of drainages will require you to focus on the trail.

At the one-mile mark, the trail switches gears and begins to descend over rolling terrain. This ridge of the mountain gets noticeably rockier, including some scree fields. Just after a small clearing, a punchy dip feeds into a tricky root obstacle in a section that is often rutted, so a little hike-a-biking isn't out of the question.

Up next, the trail heads toward the valley by means of rocky switchbacks separated by steep segments. The turns can be a bit awkward and things are generally challenging. Roughly half way through this section, the Red Ledges Access Trail (160) makes its appearance. A final series of switchbacks feeds into a more gradual descent along a stream.

Pretty soon, the trail reaches its low spot before heading into a climb. The same stream you've been following may be back-flowed here, creating a large muddy bog. A more easily-traveled, user-built go-around avoids the worst of it.

The next third of a mile is a very steep calf-killing ascent through thick trees. This heartfelt climb may feel better as a hike-a-bike in sections. Fortunately, the last mile of the trail features a mild pedal up to the intersection with Aspen Flat Trail (018).