The two southernmost trails in the Saint Joseph system are easily combined into this fun little five mile ride. Nearly all of it is hard-packed singletrack. The connection between the two trails is via the paved Urban Trail that lines the Saint Joseph Parkway system. Corby South has some climbing to it and recently added a dirt jump park about a mile into the trail or it can be accessed at the north end of N. 26th St. Corby North is fairly level with gentle hills (mostly) that make it seem quite easy after riding Corby South. Kids may not enjoy South but they can ride most of North.

Corby South has a bit more erosion because some of the trails have been there since the 1930's. This makes them quite rooty in places, but for those who like a technical challenge, this is how St. Joseph does it. There are log roll overs on both trails. North's are smaller and there are bypasses for the kids. South has one big one with no bypass and a steep backside. North even has a log skinny, again, with a bypass.

There are some decent views of Corby Pond as the trail skirts along the bank, and both trails encounter some open fields.

At times, even when the trail is dry, there can still be mud or softness after the tunnel and at the very end of the trail where it rejoins the paved path network.

Generally, most people ride Corby South first then open it up on Corby North. One can park near the end of North and ride the paved path system over to South's parking lot. At the parking lot by Corby Pond, South begins and ends. The start is to the east of the parking lot marked with a brown post in the ground with the trail name and "Start" on it.

At about the half mile mark, one enters the first field. TURN LEFT, following the edge of the field uphill and then back down toward reentry into the trees. Ignore the trail intersections, the extra wide bridge, and stay straight, eventually returning to open field again. Go straight, again following the edge of the field. You'll quickly return to the trees.

Just after the one-mile mark, the trail again intersects the cyclocross track. Ignore it! Ignore the extra wide bridge! Again, keep straight! Cross a small banked bridge in a right turn, and you'll climb a little and enter the next field. You'll head fairly straight along the right side to the re-entry point into the trees on your right. IMMEDIATELY, upon reentry, you'll see the extra wide cyclocross bridge (you probably saw it already) BUT TURN LEFT!

Around 1.84 miles, the trail BARELY gets back into the field and isn't confusing.

After crossing the railed bridge near 2.25 miles, you'll emerge near the street. Turn right for a quick reentry. Right after the drainage crossing, the MTB trail goes uphill. Take the wider path with the wooden waterbreaks. You're more likely to come upon walkers or people fishing on this next bit as the trail skirts along the bank of Corby Pond.

As the trail leaves the pond and goes uphill, KEEP STRAIGHT UP THE HILL ignoring the paths to the left. A little bit of rock on some fast downhill signals that you near the end. You'll see the parking area as you approach it. The MTB trail heads back toward the water and ends to the west of the parking lot.

Cross the parkway onto the paved urban path system. At the intersection, turn right. Continue up the hill until you reach the green bench in the photo. The trailhead for Corby North is behind this bench.

The trail comes out of the trees a couple times at the paved trail quickly turning back into them without leaving the dirt. After going through the tunnel and making the short, steep climb beyond, the trail intersects the paved trail again. The singletrack turns left paralleling the paved path for a brief period before turning left back into the trees. This is the last section to rip before the end. You'll end at a bridge on the paved trail near the northern parking lot. This section is often muddy which makes first time riders wonder where the trail went. It USED to continue before the city changed this area. So, now the trail ends here.

The northern parking lot is to the right. To return to Corby Pond parking go left and then turn right at the intersection. It's visible from where you get on the paved path so you won't get lost.

One can ride the Parkway or Urban (paved) Path north to Girl Scout Trail and Brownie Trail to complete The Lower Four. Some even ride the parkway to Krug Park and climb to the trailhead there. 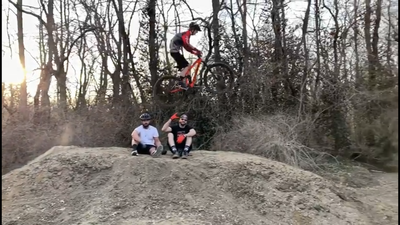 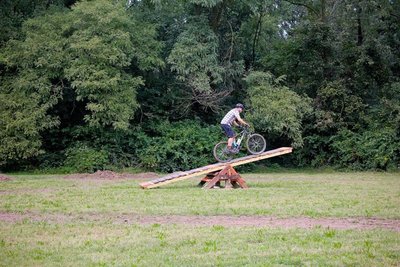 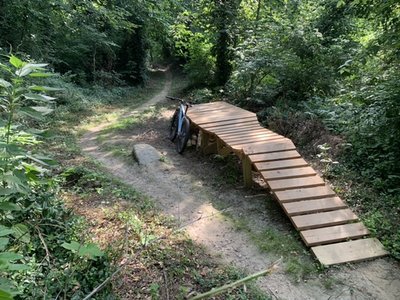 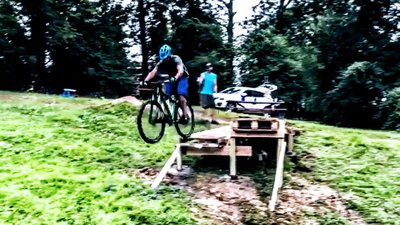 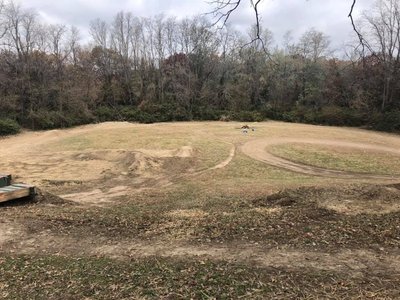 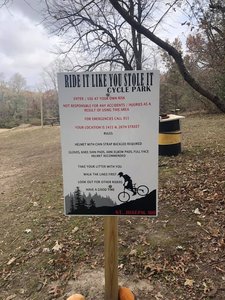