“Known as "the Narrows" and "Big Bend" this section of the Sheltowee has an adventure feel. ”

The Sheltowee Trace NRT: Section 15 North passes through Natural Bridge State Resort Park which is also a State Nature Preserve. Because of the nature preserve status, mountain biking is not allowed in a large portion of the state park. At the southern end of the park, the Trace exits onto a long ridge known both as "the Narrows" and "Big Bend."

"The Narrows" refers to a short section of the ridge that crosses White's Branch Arch, a natural sandstone ridgetop arch. For a long time, this ridge was popular with off-roaders until the Forest Service moved in with bulldozers and chainsaws. The result was a gauntlet of downed trees and tank traps. In the past couple of years, most of the trees have been cut back by the Sheltowee Trace Association, and I've seen at least one mountain biker ride the tank traps like a boss. So this section, with perseverance, is open for business.

North of the arch there are some really cool parts of the trail that cross bare sandstone. The ridge rolls and winds so it has a nice variety of terrain and challenges. South of the arch is nice as well and is more open. It's all doubletrack, but the Narrows portion feels more like singletrack.

Once out on the gravel road, you are on a public right of way, but Big Bend Road isn't well maintained. It is a great long ridgetop gravel grind through more National Forest until the last half mile or so where there are a few houses.

This portion of Sheltowee Trace deserves to be ridden more and to get more love and care. 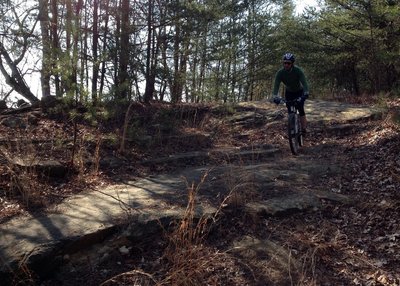