Upper Wilson Ridge begins at Edgemont Road near the community of Gragg and ends at at Schoolhouse Ridge Road - FSR 4068 at NC 90.

Also known as 21 Jumps, there are a string of several jumps that begin to appear just after the top. This trail has been around a long time, and many of the mounds have worn down to humps instead of jumps, but they still offer a good roll and a nice opportunity for some air.

Several side-trails appear off of this trail (most of which go nowhere), but an established main line exists. At approximately 1.8 miles there is one pronounced fork in the trail. Wilson Ridge stays LEFT here, and Schoolhouse Connector continues right to Schoolhouse Trail 259 (Upper Thorps Creek).

Upper Wilson Ridge is not as technical as other trails in Pisgah, but has its moments. Just after a nice side-cut section, there are a handful of uphill rooty sections next to some big trees. This is just before the fork in the trail mentioned above. After that left and the trail is mostly downhill to 4068 including some newly uncovered original corridor that is tight with small trees.

This trail arrives at a guardrail on Schoolhouse Ridge Road - FSR 4068. A new section has been reclaimed just around the corner. Take a left here on the road, and another left on the singletrack that starts on the left. This last segment dumps out at the beginning of 4068 at NC 90. Turn right there on 90 to continue to Middle Wilson Ridge, or right on 4068 if your loop takes you to Schoolhouse Trail 259 (Upper Thorps Creek) or back to Edgemont Rd. 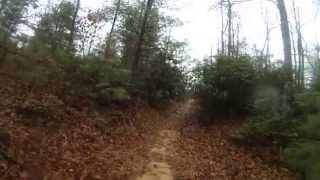