“A good combination of contouring around hollows and rolling creekside sections. ”

This trail can be thought of as an upper and a lower section, roughly equal in length, and in the middle come to within about 50 feet of each other and have a short connector between them. Thus, it can be ridden as a complete loop or a number of different Figure 8 options. It is often ridden piecemeal in combination with the adjacent East Armuchee and Pinhoti trails and nearby Turkey trail.

The route as posted is based on a Figure 8 loop, though as stated, it can be ridden in many possible routes. For the purposes of general description, if you're beginning at the northeastern end, the entire "upper" portion is generally 2.5 miles of nice trail following the contours of the hollows in and out of the ridgeside. There are numerous short, but at times brief, climbs and descents, often into a rocky stream crossing. The trail surface itself is rockier than most of the trails in this system. As one of the less often ridden trails, this can be more challenging after the leaves fall.

The "lower" section, that is the west half if the topo is not obvious, has a completely different complexion. It tends to be wider, smoother, and the ups and downs tend less steep but longer in scale.

As for connections, the two northern ends are separated by 0.2 miles and 100 feet elevation diffference by a portion of forest service road 310, along which co-rides the Pinhoti Trail connecting the Dry Creek complex to onward segments of the Pinhoti continuing around the north end of Johns Mountain. At the southern end of Wheat, there are connections directly onto the East Armuchee trail as well as Forest Service Road 226C which connects 0.4 miles later onto the other end of the East Armuchee trail.

The Wheat Trail is part of the 26+ mile Dry Creek trail complex, a collaborative effort between the mountain biking and equestrian communities. This trail is also commonly known as the "purple" (or blue) trail from the trail map posted at the main parking lot and available on the NW Georgia SORBA website. The trail markings are waist-high slender signs with a color code and the number 239.

Please yield to equestrians and be friendly and note that this area is USFS land open to hunting in the fall and early winter, so exercise appropriate caution. There is a $5 per car per day parking fee for the main parking area at the center of the complex or alternate parking areas including the Pinhoti trailhead at the intersection with East Armuchee Rd. 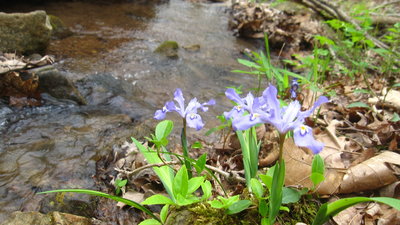 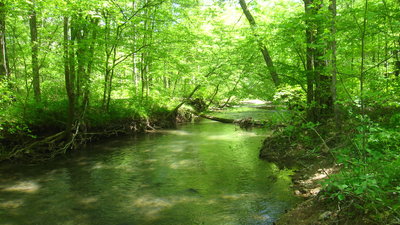