Lakeview Loops I, II, and III

“3 Stacked Loops along the lake with a little bit of climb, flow, speed, and water. ”

Lake View Two is closed as of 1/10/2020 for construction. No time line information available at this time. Current status is here
fopsp.org/current-info.html. As of Labor Day 2021 this trail is open!

Closed from dark until daylight. Closed for 24hrs for every 1" of rainfall. All parking requires either annual or daily park admission fees.

Great medium-length trail that has a bit of everything. Some nice flowing sections, a couple water crossings, quite a few obstacles, and several short ride-off Red sections, though the main trail is identified as Blue. There are also a couple mild, but sustained, climbs. The views of the lake are great, especially at the point where Lakeview III is the farthest out and turns back. It's more than halfway into the ride, but we consider it the turnaround, and often stop to enjoy the view and a snack before starting the climb back out.

Lake View Two is closed as of 1/10/2020 for construction. No time line information available at this time. Current status is here
fopsp.org/current-info.html

The main park entrance is off Beach Rd. Some parking is available at the newly located Nature Center just to the right at the greeting station where parking fees for the whole park are collected. The Park Store has a few items of essential gear including maps. Ride down the road toward the campgrounds. It's an easy downhill past a few campsites until you turn right into the woods immediately after the wood splitting shed (can't miss, as it's the only feature on the right-hand side). Follow the trail straight in.

At the first intersection with a piece of fire road, you can turn left, which becomes an out & back lollipop handle (adding about another 1-1.5 miles), or follow the obvious trail straight to where it T's in. The lollipop handle is coming in from the left, so turn right to head down into the woods.

After a brief downhill, there's a water crossing, and a quick climb out brings you to another T. This is the beginning of the Loop sections, which are uni-directional. Head left to begin Lakeview I. The trail weaves in and out, mostly following the terrain. There are small downhills and climbs, but nothing to slow you down.

You'll eventually work your way down and cross a fire road as you head out further along the lake. Between 2 1/2 & 3 miles in, there is a split for Lakeview II. You can either keep going or follow the sign that reads EXIT to finish up. If you ride out, you'll finish the loop you started right after the first creek crossing. On exit, you'll want to turn left, cross the creek, and head back up to the camp road, again turning left and heading back to the parking lot.

The back half of the Lakeview I loop is one of the fastest sections of the ride. It's mostly level to gentle downhill slope, and you can really crank it up. A couple of spots are tight, but all is manageable at speed.

For those who keep going, Lakeview II is similar to LV I. There is one large log crossing and one section of tabletop rocks to navigate. Overall, the trail does a bit more (or at least longer) ups & downs. The middle of LV II has a couple nice run outs near the lake (with a long optional log ride just before the 2nd), and a couple well-marked offshoot loops. The offshoots are red, the main trail is blue, and they rejoin fairly quickly (1/4 mile or less).

After the lakeside view, the trail turns back inland for a short bit until the tabletop rocks. They are the last feature of note prior to the split for Lakeview III. If you ride out LV II, there is more similar terrain, followed by a nice climb with a switchback after a bridge crossing. It becomes LV I again not long after, and the exit is the same.

Lakeview III is worth the effort. The most obstacles, fastest section, longest climb, and best view of the lake are all back here! Almost immediately after the LV II split is a biggish log over, then the first of several quick drops to very short bridges. Lots of the fast little crossings followed by short, steeper climbs.

The fastest flowing section is around mile 5 (or just before) out to the lake overlook. This is a good place to stop & enjoy the view before starting the ~1/2 mile of mostly climb back out. It's not steep, but compared to others out here, just keeps going. Once it levels out, it's very similar to LV I and LV II as you eventually rejoin both on the way out. Both of these trails will merge in from your right due to the layout of the stacked loops. 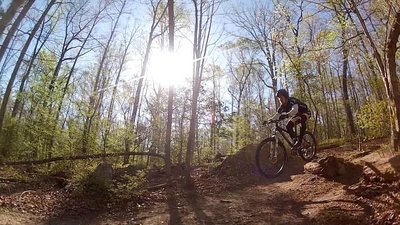 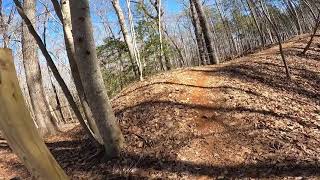 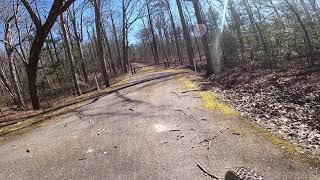 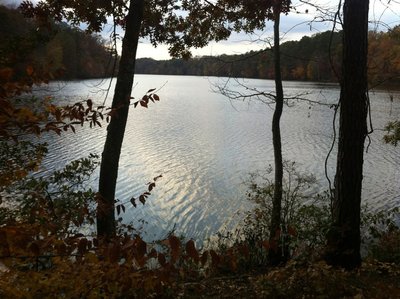 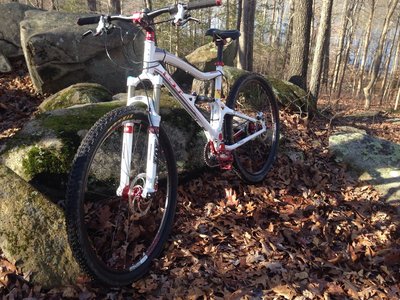 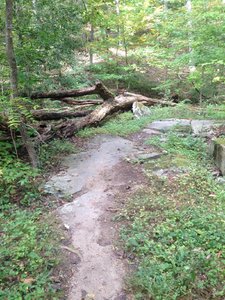 Slave Trail to the Pirate Trails