This segment connects a series of mission sites in the Sierra de la Giganta, each harboring freshwater streams and the shade of palm groves. Resupply is limited, although there are a number of communities, stores are very small. The riding is challenging, mountainous, yet rewarding. Some of the canyons in the Sierra de la Giganta feature persistent surface water, which means you don't have to carry as much on the bike. There are no developed water resources between towns. Load up on food when available. San Isidro and the Comondús have small stores, whereas El Rosarito and San Javier feature small restaurants with limited packaged snacks to go. Ley Federal de Aguas Numero 1 is a federally funded agricultural community and Ciudad Constitución serves as the commercial hub for the area and provides all the things you'll be seeking after a few days in the backcountry including tacos, panadería, coffee shops with wifi, motels, and supermarkets.

Climbing from El Rosarito over a low pass to San Isidro the road shows signs of storm damage, but is well-traveled and easily passable. South from San Isidro to San José de Comondú and San Javier you cross a series of drainages, some are deep canyons, on roads further damaged by recent weather events which are now only passable by high clearance vehicles. San Javier is one of the most frequently visited mission sites outside a major city in Baja California, although resources are limited due to its proximity to Loreto. Continuing south from San Javier a well-traveled road gives way to a lesser-used backcountry route to connect to Ley Federal #1, some of which has been recently damaged by storms, resulting in some rough tracks and sand. The connection to Ley Federal #1 however avoids the paved roads in the main valley further west. The route from Ley Federal #1 to Ciudad Constitución winds through citrus groves en route to the big city, a pleasant ride showcasing more of the economy that sustains Baja California. Ciudad Constitución is like several other towns on the route, a great place to connect with modern front-country Mexican culture. It is worth finding a motel for the night to walk the streets and enjoy tacos, music, and a few hours out of the sun. Most evening activity happens just after sunset and most eateries close by 9 PM. 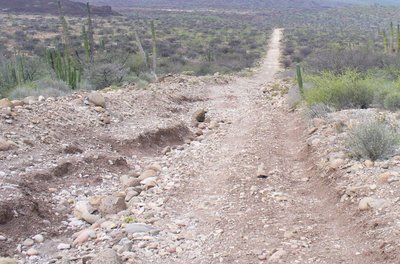 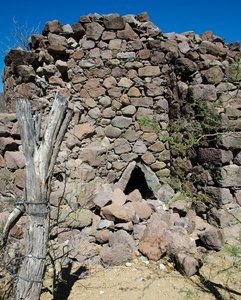