Enter Mexico! Climb out of Tecate, desert camping begins several miles outside Tecate, the highest point on the route is between Neji and Ojos Negros at 4,700′.

No water available between the south end of Tecate and Ejido Sierra Juarez (63 miles), do not camp immediately at the bottom of the first unpaved descent after Tecate due to a potential security risk.

Tecate is one of the largest and most pleasant cities on the Baja Divide. From the border, the route passes a large shaded plaza, a small commercial alley with two bike small shops, the towering Tecate brewery, and a shopping center with an expansive modern supermarket and other resources. Be sure to obtain cash from a bank ATM, which won't be available again until Vicente Guerrero (247.2 mi); and food, which should get you through to Ejido Sierra Juarez (63 mi from the edge of town).

The route climbs through a series of neighborhoods from the city center, onto unpaved streets, and rejoins a two-lane highway for the final miles out of town. Resupply, camping, and motels are available along that main road, and the final point of resupply is a commercial plaza including an OXXO convenience store in San Francisco, immediately before turning onto the dirt. This is the last water resupply until Ejido Sierra Juarez as well, although in wet seasons there may be two streams flowing along this section. Wild camping is possible several miles after leaving the paved highway south of Tecate, and free camping is abundant beyond this point along the rest of the route. Be respectful of the land and local residents.

From Cañon Manteca the route slowly climbs small dirt roads to join a larger dirt road at Neji where no official services are available. Continuing south the route ascends to 4700′, passing several pine stands and sage meadows at an elevation near the highest point on the Baja Divide. Descend to Ejido Sierra Juarez and Ojos Negros from the high point.

Ejido Sierra Juarez has a good store, a small restaurant, and a tiny beer shack. Purified water is available at the store and there may be informal camping near the edge of town. Ojos Negros is a larger community just 3-4 miles down the road and has several stores, restaurants and is a popular checkpoint on the Baja 1000. There is a campground on the left as you ride into town. Stock up in Ojos Negros for a day ride to Ejido Uruapan and Santo Tomas, which should take about 4-6 hours. 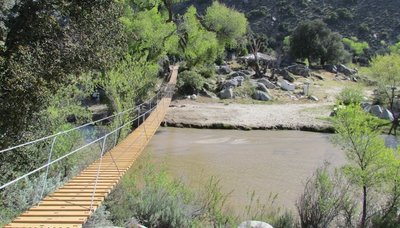